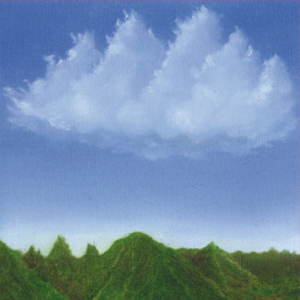 Available on: Thrill Jockey CD/LP/digital
With his fifth album (and first for Chicago’s Thrill Jockey), English folk outsider Alexander Tucker has come of age as a songwriter and arranger. Dorwytch is a little gem of woodland psychedelia, its dense layers of acoustic loops, eldritch drones and electronic flourishes standing out from an increasingly crowded neo-folk landscape.

Working largely alone – although with the occasional crucial and well-considered collaboration, notably with improv drummer Paul May – Tucker has crafted a record that instantly draws the listener in and doesn’t loosen its grip until its final note has sounded. The keening, charming ‘His Arm Has Grown Long’ sets the tone, a questing, quizzical tale which summons the heyday of Joe Boyd’s Witchseason Productions. ‘Red String’ is beautifully arranged, Tucker weaving magic out of simple materials: cello, acoustic guitar, glockenspiel and his own mournful yet mellifluous voice, at one turn reminiscent of Andy Partridge, at another of Roger Waters, but also highly distinctive throughout.

Lyrics hint at the otherworldly, of “voices like apparitions” and “unearthly forms shifting in shape”. Tucker’s great success is to marry sounds to these supernatural tales that add to, rather than detract from, their near-occult power. And when there are no words, the instrumentals have a special intensity of their own. ‘Half Vast’, for instance, layers analogue drones and shimmers like in a kosmische style a la Rene Hell, whilst ‘Jamie’ features plucked guitar and backwards cello fixed in lovely counterpoint, the song becoming more weird, engrossing and surprising as it progresses.

Dorwytch‘s tracks sound great in isolation, but even better as part of a whole. Individual highlights include ‘Pearl Relics’, built around a circling cello riff that sounds as heavy as the Kronos Quartet playing Hendrix, and the lazing-in-the-grass country blues of ‘Atomized’. The shift from pastoral bliss to acid rock heaviness when Paul May’s drums kick in is as pleasurable as similar moments in the archives of Roxy Music, Levitation and Talk Talk. Fabulous. ‘Sill’ is another delight, Tucker singing evocatively of “distant shorelines interred with the ruins of buildings blackened by wind’s desire”.

One of the notable features of this album is how successfully Tucker wrestles such a range of sounds into a larger coherence; each track sounds unique without sounding like an impostor from another record. The wordless harmonies and mewling cat of ‘Craters’ provide a fitting finale to this timeless and anim(al)istic work. Listen and enjoy.