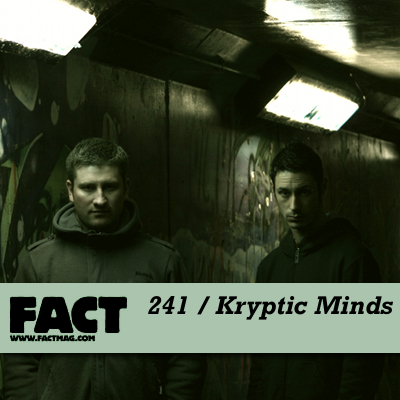 It’s a Bank Holiday, the sun’s out,  the air is sweet (sort of). So what better time for one of the dankest, fiercest FACT mixes that you or we have ever encountered?

Dankness and fierceness aside, Kryptic Minds’ FACT mix 241 is every bit as nuanced as their own productions, with a strong, confident narrative and a spacious sound design that conspire together give it a near-cinematic quality. Listening to it, you can readily infer the kind of drum n’ bass influences that are central to Brett Bigden and Simon Shreeve’s dubstep vision: the lustrously darkside landscaping of Source Direct, Omni Trio, Photek, early Metalheadz and Reinforced. Urban music in the truest sense: inspired by, and made for, life in the city.

Kryptic Minds are perhaps best known as standard-bearers for halfstep, their 2009 debut album One Of Us (released on Loefah’s Swamp81 label) sparking renewed interest in dubstep’s rhythmic founding principles, precisely at a time when many in the London scene were opening up to the emergent sounds of funky and recombinant UK garage . It’s not that the KMs were, or are, deliberately going against the grain; they just know where their allegiances and affections lie, have little time for fashion, and have established the parameters within which their creativity best thrives.

Since 2009, Swamp81 – originally conceived to push the halfstep sound which Loefah himself spearheaded earlier in the century – has increasingly become an outlet for 808-heavy house, juke and electro-influenced music from Ramadanman, Addison Groove, Boddika et al. Kryptic Minds’ new album, Can’t Sleep, comes courtesy of Black Box, a label home to formidable 12″s from RSD, DJ Madd, Hatcha, N-Type and Cyrus. It finds them adhering steadfastly to that rhythmic tradition, but refining it down yet further to its minimalist, raz0r-sharp essence, and at the same time developing the textural and harmonic side of what they do, with a couple of ventures into out-and-out song-form.

FACT mix 241 shows you exactly where they’re at, comprised as it is almost entirely of their own productions. No less than six tracks from the new LP feature, includling Youngsta collaboration ‘Arcane’, plus seven previously unreleased dubs. The producers’ producers, Kryptic Minds are really very special, and deserving of the highest respect. Plug into their immersive, transporting FACT mix and you’ll see why.