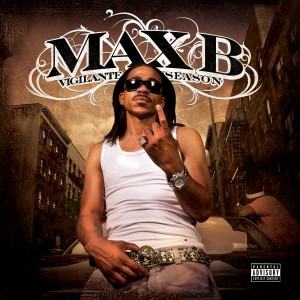 All Max Bygreaves fans, turn back now. This is a different Max B: Harlem’s Max Biggaveli, an ex-Dipset and Byrd Gang affiliate who went solo around 2008, singing and rapping on a slew (or ‘Wave’) of cult/street classic mixtapes before being sentenced to 75 years in prison in 2009 for his alleged involvement in a robbery-murder. Hence the phrase, popular with rappers, rap fans and cognitively confused elderly Max Bygreaves fans, ”Free Max B”. While ”Biggaveli” himself might not be free, those looking to get hold of his back catalogue will be delighted to know that the majority of it is available for utterly nowt from websites like Dat Piff – personally, I’d recommend Wavie Crockett, Quarantine and the French Montana collaboration tapes Coke Wave 1 and 2.

However Vigilante Season, Max’s first album release proper, is as good a place as any to start, featuring both ‘new’ album-exclusive material and some of his most sing-along-when-drunk-able mixtape classics, such as the almost unreasonably jolly Jim Jones/Blondie chorus savaging ‘Tattoos On Her Ass’ and the mellow, summer-breeze shimmer of post-club horny single-man anthem ‘Where Do I Go (BBQ Music)’ – just replace ”BBQ” with ”Sexually Un-stimulating Kebab”, British readers. Old and ‘new’ (actually all recorded in 2008, before Max’s incarceration), each of these tracks show off both Max’s rapping and song-writing skills, used to typically slow-burning addictive effect. Vigilante Season is packed with hooks and hooks-masquerading-as-verses (or even lines) that you will find yourself humming soon after hearing Max mumble, wail and/or moan them in his utterly distinctive voice.

Ahh yes, that voice. It’s certainly not a pretty voice, and is probably responsible for putting as many people off Max as onto him. If we agree with the late great Guru’s judgement that in rap it’s “mostly the voice” that maketh (or breaketh) the rapper, what are we to maketh of Max B’s voice – mumbling, slurring, failing to reach or sustain semi-difficult notes, occasionally falling off-beat and/or tune? What’s important is that he makes that voice work for him, despite and because of its audible limitations; his rough-like-Timberland-wear singing suiting the grimy East coast beats he prefers as perfectly as Nate Dogg’s smooth crooning slotted immaculately into Dr. Dre’s ultra-slick G-funk sound. The production on Vigilante Season, mostly the work of New York veteran Dame Grease, tends to combine brittle but funky head-nodding drum loops with atmospheric, often dramatic (though cheap sounding) synth-strings, pianos and Casio chorus-singers and is the perfect platform for a rapper/singer who is not so much rough around the edges as superficially smoothed out around a rough’n’tough musical and personal core.

This irrepressible roughness powers threatening thugged-out brag assaults (‘Green Gain’, ‘Boss Don Season’), the triple-X rated stinky pillow talk of ‘Porno Muzik’ (imagine, say, Usher credibly singing “Gotta nigga lovin’ it, skeet it in ya face, bitch / Grip me by the balls, I need you to come and taste this”) and the gleefully juvenile attacks Max habitually makes on former mentor and current arch-enemy Jim Jones (for example claiming that Jim’s girl Crissy had to take her dentures out before attending to ”The Wavy One”’s Wavey-Wand). Not that Max B’s music is uncontrolled. The lurching looseness of his style allows him to give vent to his eccentric, fun-‘n’-guns loving personality, but a track like this album’s excellent lead single ”Money Make Me Feel Better’, on which Max sticks to rapping for the verses and singing for the hook, shows the rigorous Harlem-hardened rap skills that always lie behind the mumbling and caterwauling.

Of course, occasionally the sloppiness takes over and Max gives us half-arsed hooks and half-sung, drearily monotonal verses over so-so beats. But, on this album, as on so many of his mixtapes, his hit-rate is surprisingly high, and when he does it right, nobody can do it like him. A vigilante taking rap law into his own hands, Max is – musically, if not lyrically – congenitally unconventional and a fiercely individual voice in a genre awash with bland imitators. Auto-tune (on ‘Baby I Need More’) can’t hold Max – he breaks free of it with his uniqueness the same way he has made various pop/rap hits his bastardised own on his mixtape cover versions. Fuck knows what Max’s self-proclaimed “Waviness” actually is, and that’s probably why the term is useful and impossible not to use if you’re a Biggaveli fan – it signifies and describes Max and Max alone. And, while Tyler The Creator makes the daily claim on Twitter that he is “a fucking table/lamp/quilt-cover”, Max B is a fucking Wave Machine. And with summer just around the corner, its time for those that currently own only Argos paddling pool albums to invest wisely in the Wave.