The group, whose Duncan Bellamy and Jack Wyllie are also members of Mercury-nominated jazz group Portico Quartet, this week released their first full EP through Subeena’s Opit Records. Lovingly constructed with a keen ear for detail throughout, it features ‘Fjord’ alongside three new tracks, ranging from the furiously sampled instrumentation of ‘Bo! Symbol!’ to the moody sub-bass of ‘Mirrors and Monuments’. While their music offers parallels with the twinkling melodies of your Four Tets and Pantha du Princes, they’re already swiftly creating a sound of their own.

We caught up with Duncan, Jack and the third member of Circle Traps, Will Ward to discuss the group’s background, playing live and Chris Rea albums.

So how long have you three been making music together?

DB: “Me and Will grew up together in Cambridge so I’ve known him since sixth form. I think we used to make stoned tunes together, mainly bad hip hop. But Circle Traps have only existed for about a year. We started playing around with ideas in about June or July and finished the EP in October.”

WW: “These guys were off doing Portico business, and they’d come round in between gigs and we’d just make some tunes. ‘Mirrors and Monuments’ was our first track, and that started with Jack bringing round some saxophone loops. We sampled that and played around with it and that was a catalyst. So it started quite organically.”

Two of you come from a background of playing live instruments. Do you think that affects how you approach making music electronically?

JW: “Yeah definitely. With ‘Bo! Symbol’ we made that track by recording three and a half minutes of improvisation each and then Will put a thubby bassline on with filters, and it came from sampling that.”

That track in particular has a very live feel to it.

JW: “Yeah, because all the drums are cut up from Duncan’s session and we just chopped them up and turned them into a little groove.”

Working with samples can be quite rigid, but you’ve managed to create a very organic sound. Is that deliberate or does it come naturally?

DB: “I don’t know how it happens. With something like ‘Mirrors and Monuments’, the sax loops lend themselves to rolling, linear compositions. They sound almost like songs.”

JW: “Well that tune also started from a live recording, so I think that added to that organic feel.”

DB: ” ‘Perspex, Glass’ was mainly made by me on tour. It started from a Ravel sample, which I found about five years ago but had never done anything with. There’s different approaches for each tune. You’ve just got to go wherever it needs.”

JW: “I think because me and Duncan have played in the same band for five years we’ve always shared music with each other. I think that was less electronic music and more modern classical and some ambient jazz stuff. But Will was a lot more into electronic stuff and got me and Duncan into that. I think while we were in Portico we were developing electronic sounds, especially the manipulation of acoustic sounds, but we couldn’t really push the MIDI side of things. So it was really nice to explore that in another project. It was another outlet.”

DB: “A lot of it came out of touring last year. Me and Jack played 170 gigs as Portico Quartet and we were on the road constantly so we hadn’t had the chance to write anything new. It was great to come home and do something else.”

WW: “I remember we first discussed doing a project together because we had this shared love for certain tracks that were coming out of the UK bass scene. It was really exciting and we were quite turned on by that, and that was what triggered it I think.”

It’s funny you should say that because there’s a noticeable sub-bass in each of the tracks that links the EP and makes it sound quite contemporary. Were you ever attempting to make music that would fit in with what’s coming out of the UK at the moment?

JW: “There was never a real emphasis on the bass sounds, but I think it creates a sense of depth so that we tried to create those levels, whether consciously or not. The bass definitely grounds the more melodic levels.”

I know you guys have started playing live together as Circle Traps. How do you translate your music into a live setting?

WW: “It was kind of deconstructing it because everything was arranged on Logic. We had these solid pieces and we had to go through them and assign each role to someone. It was quite a backward way of doing it for these guys.”

DB: “I suppose as a drummer it felt logical for me to cover the rhythm side of things, and keeping the drums live is a really good way of making it feel quite live. Jack plays anything on keys and Will is the MIDI man.”

JW: “Keeping it as live as possible and keeping the possibility that you can make as many mistakes as possible is really important because it keeps you in focus. It opens up room for more improvisation as well. So when we play live they’re not the same pieces as you hear on the EP. We can go into little improvised grooves.”

WW: “There’s a lot of new elements to the live stuff. The tracks are fundamentally the same but there’s room to be a bit more abstract.”

JW: “We could keep on making it more live, and that’s something I’d quite like to do. I think it would be quite exciting from a visual point of view to see someone playing the sax live.”

WW: “We also introduced a vocalist at our last gig for The Gravy at The Gramaphone in Shoreditch.” 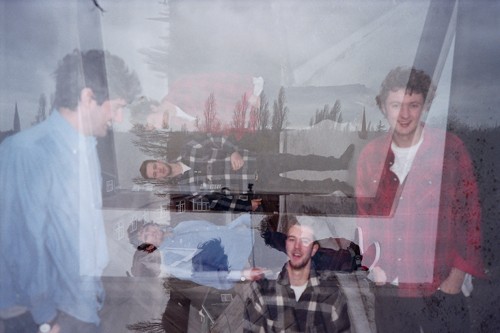 Yeah, I was about to say that you played with Cornelia [Dahlgren, a Swedish singer now based in London], who’s also sampled on your track ‘Perspex, Glass’. Are you planning to do more work with vocalists in future?

DB: “Well we did a remix of Cornelia’s new EP called ‘Aquarius Dreams’ which will dropping soon on her own label Camp Mozart.”

WW: “When we finished the track it didn’t have much of her vocal left in, but we decided for our live set it would be nice to play the track as we’d remixed it and then have her sing over it.”

JW: “What I like about these things is that we can remix a track, have her sing on it and create something new.”

So are you planning to play out live again in future?

DB: “Definitely. We’ve got a few gigs lined up. We’re playing at the Aplhaville festival in May.”

The EP is coming out on Opit. How did you hook up with Subeena’s label?

JB: “I think me and Duncan met her through Jamie Woon at the Red Bull Music Academy at Barcelona a couple of years ago.”

It seems quite a natural fit for you guys, because the recent releases from Subeena and Milyoo also have quite a musical feel to them, although I suppose you’re their least dancefloor-orientated signing. Would you ever consider making music that was geared specifically at the dancefloor?

JW: “I guess we want to do some more stuff like ‘Bo! Symbol’, which is the most dancefloor-y thing on the EP, or at least the most aggressive thing on there.”

WW: “Me and Jack have actually made a little garage banger recently. ‘Fjord’ also has quite a garage lick to it. That could work at five in the morning or maybe as an opener to a set, although I don’t think that was ever the intention.”

One thing that’s noticeable about all four tracks on the EP is how atmospheric they are. They all have their own distinct character or mood. Was that a conscious decision?

DB: “We deliberated for a while about what to put on the EP. I’m quite happy about how it came out as I’ve always liked EPs that have a few different flavours.”

WW: “There was always quite an emphasis on texture and depth of the sound. So the mixing was something we spent a lot of time on.”

Have you got any more releases coming up?

DB: “The remix of ‘Cornelia’ will be out in the next month or so. Portico are trying to write an album at the moment so we’re just trying to fit in stuff around that.”

WW: “We all throw different stuff into the mix so it’s just a case of getting together again.”

DB: “We definitely plan to get another EP out by autumn…. or maybe ten.”

DB: “Well, my dad was listening to Chris Rea at Christmas, and apparently he made 10 albums and then released them all as one mega-album. So maybe that should be our new concept.”