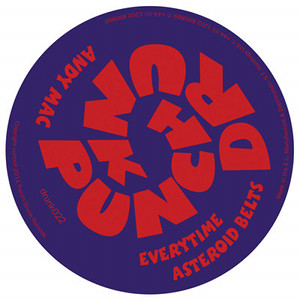 Whirring to a start as it does with revolving crackles, faint organ tones and muffled, wordless oohs, ‘Everytime’ sounds like something dug up out of a time capsule and half-assedly dusted off. It’s a strange quality exacerbated by the track’s top-heavy, midnight blue chord scale, lifted from some delirious house track from 1993. Is Andy Mac really a new producer from Bristol or did Peverelist just stumble on some obscure old record?

While it’s fun to think up conspiracy theories, Andy Mac is yet another new name dredged up by Tom Ford to add to the Punch Drunk stable (following the similarly excellent debut from Kahn in February), one whose ancient-sounding garage hybrids fit well within the label’s steadily expanding outlook. ‘Everytime’ is, like Kahn’s ‘Like We Used To’, hooky, weighty, and best of all, curiously timeless: its most time-ravaged retro elements are undercut by the cruel whiplash of a 2step beat that skips and doubles up like it’s strategically beating the tune into submission. But crackle pervades and the highs are blunted, so the rumbling low-end thud becomes the track’s most outgoing characteristic amidst all the hazy grey melodicism.

On the flip, ‘Asteroid Belts’ is more overtly house, like a rudimentary half-blind stab at old 4×4 UK garage as the song’s steady chug steamrolls similar vocal samples. With its deflated diva vocals, sluggish zombie-like momentum, and dub atmospherics clouded with impurities, Andy Mac’s debut fits well into the retrofuturist fetishism of modern bass music and beyond, but it’s strong enough both melodically and rhythmically to transcend mere context or gimmick. Every time, always.