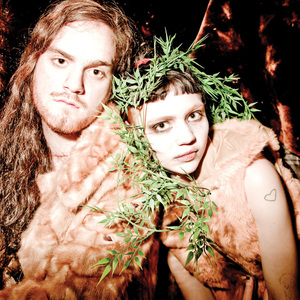 Available on: Hippos in Tanks 12″ EP

The premise is watertight for sure: Get two of Canada’s most intriguing new artists to take on a split EP, a side apiece. Release on Official label of Right Now – Hippos In Tanks. Now, step away from the screen and watch the blogs go mental.

Sure, it helps that one of the artists is laptop producer Clair Boucher aka Grimes – responsible for one of the more fascinating documents to come out of the whole witch house, hypnagogic pop datastream. We’d barely detangled Halfaxa when news broke that she’d teamed up with fellow Canadian d’Eon. Not that we’re complaining.

On ‘Urban Twilight’ Boucher distills the mood of the title through an ominous, amorphous drone which threatens to engulf the medicated vocals. Like Salem lurking at the chainlink fence by the kids’ playing field it just feels loaded with ill-doing. Of course, both Boucher and d’Eon make music which feels dislocated, lost perhaps, but ‘Vanessa’, the record’s high point, actually teeters on the brink of non-existence. As if a breeze blowing one way would result in Cocteau Twins lofty pop-art confection, a breeze the other: nothingness.

Bookending his set of four tracks with gallops of mobile phone interference, D’eon’s touch is less deftly applied, switching between r’n’b affectations, decontextualised genre signifiers and periods of infuriating lyrical crywank. Unlike Holy Other or How to Dress Well, D’eon’s retooled r’n’b is mild and earnest, mustering a subversive, androgynous croon out of his wispy vocal cords. Sure, he sings sexy but can’t shake the sadness that numbed debut Palinopsia’s nether-regions. “Maybe if I took a thousand pills/ if I fucked a thousand girls/maybe I could read your mind” he laments on ‘Thousand Mile Trench’ over frenetic rimshots and crisp snares that may or may not be a fashionable nod to footwork. On ‘Tongues’ the sanitised ’90s d’n’b is a simply a flourish too far; the sound of an artist showboating too hard and disappearing between the reference points.