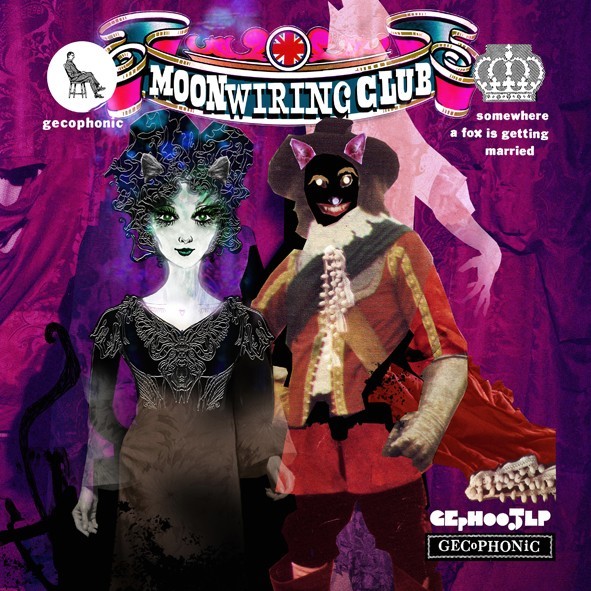 Earlier this year, FACT spoke at length to Moon Wiring Club – AKA Ian Hodgson – about his music and the fictional world of Clinksell in which it’s set.

In the interview, he alluded to a commemorative Royal Wedding LP that was he was working on. Being the kind of chap who follows through on his bonkers ideas, Hodgson this week releases Somewhere A Fox Is Getting Married, available on vinyl courtesy of his own Gecoophonic label. Things are rarely straightforward when it comes to Moon Wiring Club, so we asked Ian if he could introduced the record himself. Here’s what he said:

Well, the LP itself is 3 things:

a) hopefully an interesting collection of wonky ghost-pop, quite dark but also FUN

b) the continuation of a MWC narrative ~ The card game from A Spare Tabby At The Cat’s Wedding [MWC’s previous album] has been won, this is the ceremony souvenir LP of a phantom wedding.

c) possibly, if you want to look for it, it references the ‘other’ royal wedding and old BBC souvenir LPs

The thing is, seeing as I do all the artwork/music/manufacturing/posting myself, there’s no one around to say, ‘Don’t do a souvenir LP of a phantom wedding with a huge pull out poster.’ Hmmm…I’d say this release is quite dark and claustrophobic, the tracks were composed as the thoughts of trapped/insane animal faced entities, or as representations of ceremonies taking place in a manifested abbey. But also it’s silly and hopefully humorous. ‘Frosty Reception’ is the sound of a most peculiar buffet. The thoughts of an insane phantom cat-princess set to an Edwardian Reggae beat? Coquettish & Insane.

Confused? Don’t worry, so are we. The important thing to note is that Somewhere A Fox Is Getting Married is as captivating a record as we’ve come to expect from Moon Wiring Club, and fully understanding its myriad inward and outward-looking references is in no way crucial to enjoying it (and would be an impossible task anyway). Wills and Kate are well into it.