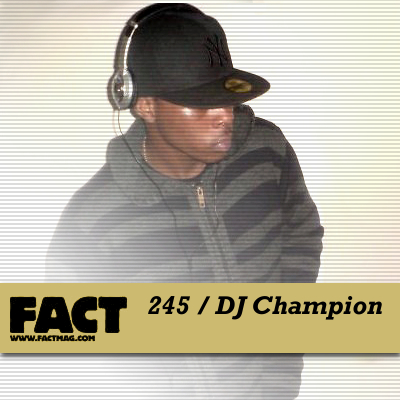 This Friday’s FACT mix is a session of bottom-heavy UK Funky by DJ Champion.

You can expect to hear a lot from DJ Champion this year. In 2009, the year that saw the breakthrough UK Funky acts from the previous Summer find a wider audience and broaden their own horizons, Champion filled up the space left in the underground with a series of anthems, ‘Lighter’, ‘Tribal Affair’ and ‘Motherboard’. As he told FACT in a recent interview, he spent the next year tied down to a deal that didn’t seem to go anywhere, but he’s back with a vengeance for 2011, with EPs penciled in for release through his own label and Terror Danjah’s Hardrive.

We’re waiting on the tracklist for Champion’s FACT mix [update: we now have it!], but we can tell you that it features plenty of his own productions, cut and chopped into tracks from Joe, T. Williams, Funkystepz, Ill Blu and more. It’s smooth, but it’s nice and tough at the same time. Which, let’s face it, is how both of us like it.