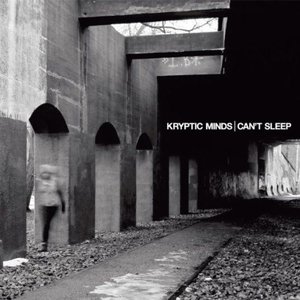 It says more about the genre than it does the album that Can’t Sleep sounds – in dubstep terms – like a sort of throwback. It’s an album that’s content to roll along at a consistent 140bpm (an increasing rarity these days), makes no overt cross-genre sidesteps and doesn’t slot obviously into any newly-emerging sub-genre. In a blindfold test, stripped of all prior knowledge, you’d probably estimate its release date as somewhere between 2006 and 2009. It is, essentially, a dubstep album.

The things is, none of the above is that much of an issue. While there’s nothing boundary-breaking here, what Kryptic Minds – the formerly d’n’b-orientated production duo of Brett Bigden and Simon Shreeve – have made with Can’t Sleep is a consistent, understated and perfectly pitched dubstep full-length. The album walks a nice line between warmth and menace – at once conjuring up the sort of solitary moods evoked by the album’s title while weaving in atmospheric, nostalgic-sounding lines of melody. As you’d expect from an LP like this, everything is underpinned by a thick, deep sub-bass, but here Kryptic Minds know how to show restraint as much as pack a punch, avoiding any ham-fisted LFO wobbles in favour of brooding pulses.

The duo’s songwriting is much more focused and, on-the-whole, accessible than on their previous, more experimental full-length – 2009’s One Of Us. Most noticeably, the record is tied together by the appearance of vocalist Alys Be on the album’s eponymous centrepiece. Elsewhere though, there’s more of an emphasis on melody and structure, leading to some of the album’s best moments – the beautiful outro on ‘Fade To Nothing’, the slow-building ‘A Glimpse Of Hope’ or the minimal, tense intro to the album’s closing track ‘1000 Lost Cities’.

As seems to be the case with much of Black Box’s output, Can’t Sleep doesn’t seem to be desperately concerned with pushing things forward, but is instead happy to relish in what we already know dubstep does very well. It’s an album that is unlikely to have you shouting from the rooftops, but nonetheless it’s a well-crafted and subtle work, and any fan of the genre is likely to find a lot to appreciate here.