Having revived his seminal art-techno imprint Profan in 2008, Wolfgang Voigt yesterday announced a new project for the label: Kafkatrax.

Kafkatrax will be comprised of three separate, hand-painted 12″s maxis released over the next three months, and one CD released in July. Each 12″ is limited to 199 numbered copies and available exclusively from Kompakt Mailorder.

According to a press release, all sounds on Voigt’s Kafkatrax – with the exception of the bassdrum – were created using voices taken from a Franz Kafka audiobook.

“The abstract overlaying and stratification of voices and word-fragments over five octavos create a psychotic-paranoid, ‘Kafkaesque’ atmosphere,” we’re told.

Listening to the two tracks on the first 12″, ‘Kafkatrax 1.1’ and ‘Kafkatrax 1.2’, we’d certainly agree with “psychotic-paranoid” if not “Kafkaesque”. The tracks inevitably remind us of the cut-up house of vintage Matthew Herbert; ‘1.2’ adopts a low-slung schaffel rhythm in the classic Kompakt style. As an added bonus, the centre-label features an image of Voigt’s face superimposed on the head and shoulders of the late Prague-born writer (see below). Who wouldn’t want that in their life?

The Kafkatrax 1 12″ will be available later this month. For more information, click here. 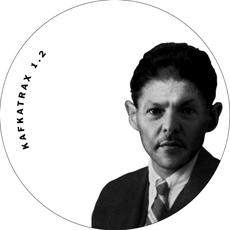