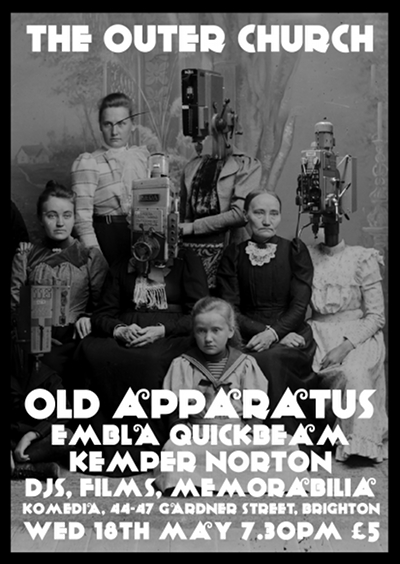 Enigmatic East London collective Old Apparatus – whose debut 12″ on Mala’s Deep Medi imprint was released to bewildered acclaim earlier this year – will creak into action at the May 18 edition of Brighton’s The Outer Church with their uncategorisable synthesis of subterranean bass, insectoid percussion and smokebelch noise.

OA appear alongside Embla Quickbeam, the arboreal alter-ego of ex-Leopard Leg member Rowan Forestier-Walker, whose field recordings and fractured instrumentation conjure visions of a mythic Albion. Rising purveyor of electroacoustic death balladry and folkish drone Kemper Norton completes the line-up and, as an added attraction, there will be screenings of two films featuring the work of photographer Thomas James with soundtracks by Northern Ireland’s Black Mountain Transmitter. The OC DJs will be on hand to fill all available gaps with ectoplasmic sound.

It all goes down at Komedia, 44-46 Gardner Street in Brighton, BN1 1UN. Tickets are only £5 in advance from Komedia Box Office and Resident Records.