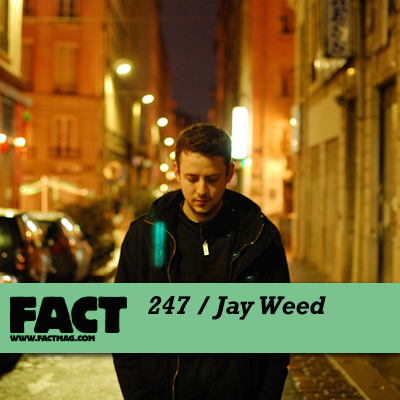 Earlier this year, Jay Weed contributed a short mix to FACT’s Producers to Watch in 2011 feature. Today, we welcome him back for a full FACT mix.

Hailing from France, Jay Weed made his introduction to many late last year with the excellent ‘Prism’ single on Oneman’s 502 label. A dark, Eastern stepper with cavernous atmospherics and the swampiest of sub-basslines, it fitted in perfectly with the late night, smoked-out aesthetic that 502 has quickly built for itself, while also sounding like little else out there. But then, that seems to be Jay Weed all over.

FACT mix 247 might not be quite as dark as Monday’s Anstam mix (few things are), but it’s not far off. Overheated drum machines reverberating in the deepest corners of the catacombs – you can practically smell the limestone.