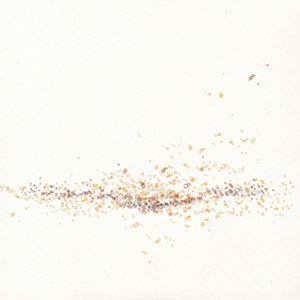 Spatial’s self-titled debut album consists of his collected singles and download extras to date, spanning from 2008 – 2010 and ordered in chronology of release. As a complete retrospective, listening should, realistically, take into account that earlier productions will potentially sound dated and that later material in the record will be stronger. With this in mind, the progression in style and success of Spatial – as both record and artist – is noticeable and makes for a rewarding listening experience.

The first seven tracks of the album progress through a selection of spacious, dubby 2-step tracks from 2008 to 2009 and, while there are a couple of instances where things stray a little too close for comfort to Burial-homage, these are most reminiscent in swing and tension to El-B, Horsepower Productions and some DMZ. The addition of cavernous delays, reverbs and synthesizer work gives a kind of Basic Channel-meets-London vibe that doesn’t feel solidified, but quite promising.

In the latter half of 2009 something changes and the productions take on a fatness and unpredictability that was previously missing. Content is the key, with much of the original choice for space instead now crammed with elements. This change is a distinct step up in gear from the preceding tracks and signals the beginning of something more individual through a particularly economic use of minimal material, repetition of motifs, and unpredictable track structures taking in more overt techno and tech-house references.

The final three tracks show Spatial’s newfound strength of compressing content into tightly packed lattices of rhythm, and is dramatic in its reshaping from the previous three offerings, let alone the former half of the album. Excessive reverb is stripped to chamber-size, giving a far leaner, aggressive edge to more radical sample usage, FM synthesis, homophony and permutations of highly limited material that parallel these tracks with SND and Mark Fell.

Although these productions are all available digitally as singles, Spatial is an excellent long-playing case study in the transformation and development of a producer, unfolding in an interesting context, and accelerating impressively through accomplishment when played sequentially.