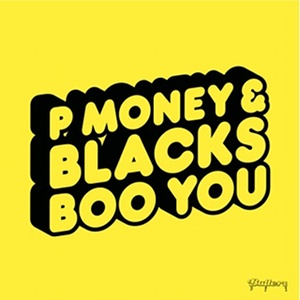 What’s going on over at Butterz HQ? Not only is their seventh release basically a garage tune, it’s a vocal tune at that. Yes, ‘Boo You’ marks the first official vocal track released on instrumental grime’s strongest label, but it’s too triumphant to feel like a regression or surrender, and who can argue with P Money and Blacks?

It’s the label’s choice of instrumental that’s so intriguing. Bassline producer TRC’s original ‘Oo Aa Ee’ was released last year as the inaugural Butterz white label, the track’s jerky, pot-and-pan snare/hat pattern, playful synth-horn march and LFO waddling finding a surprisingly fitting home in the Butterz camp. But rising grime producer Royal- T took it to another level of genre abstraction with his previously dubplate-only remix, an out-of-nowhere 180 where the track’s forward momentum is bunched up into a hopping garage pattern, kissed by blissful chords and a new melody so nimbly dropped into the chaos that it sounds like the work of a producer well beyond Royal-T’s few years.

Royal-T’s remix is the kind of thing that stood out like a sore thumb throbbing in neon red in any mix or set that it appeared, and its standout nature makes it anthem material. The vocals piledrive with a delirious momentum, lending the two MCs’ barks and grunts a hooky, earwormy insistence, the sound of grime working its way back into the public consciousness even if it means it has to claw its way up from the bottom. It’s a pop song in that it’s appealing to popular tropes, garage revivalists and maybe even “future garage”, but it’s uncompromisingly grime in execution, with nary a note of singing in sight.