Revisited & Remixed (1970-99) is a new 2xCD compilation celebrating the work of Popol Vuh.

It’s being released on June 24 by SPV Records to mark the 10th anniversary of Vuh founder Florian Fricke’s death. The first disc sub-titled Planet Side, is essentially a ‘best of’, showcasing twelve classic tracks from the catalogue of the seminal band, whose singular and acutely spiritual music traversed classical minimalism, Eastern music, new age electronics, progressive rock and, in their latter years, ambient techno. The majority are taken from their soundtracks for Werner Herzog’s movies Nosferatu, Cobra Verde and Aguirre, but there are also selections from their debut Affenstunde and a clutch of more electronic-leaning pieces from the 1990s. It’s hardly the definitive compilation – there are no selections from the wonderful Hosianna Mantra, for example – but it serves as a fine introduction to the band for newcomers.

The second disc (Cosmic Side) compiles remixes by various artists from the worlds of house, techno and the electronic avant-garde. Mika Vainio‘s masterful take on ‘Nacht Schnee’, and Haswell & Hecker‘s ‘Aguirre I / II’ , both appear in edited form, the full versions having been released on limited edition 12″ by Editions Mego back in 2008. Other remixers include Innervisions supergroup A Critical Mass (Âme, Henrik Schwarz, Dixon), Moritz von Oswald, Thomas Fehlmann, Mouse On Mars and Stereolab.

“Popol Vuh guided me into a world of wonder and awe,” says Stereolab’s Tim Gane. “At its core the music is very spiritual, they just sound far out and mysterious. The clanging guitar chord of ‘Wehe Khorazin’ will stay with me all my life. At that moment you really do travel a million miles. “

Roland Appel, co-producer of the Revisited & Remixed project, adds: “To be involved in a project like this means always to require as much as possible knowledge about the music or band or artist , who created the original. I thought that I know a lot about Popol Vuh. But I learned that there is much more behind this project than music. It’s almost a cosmos and I think that’s the reason why the music and the project Popol Vuh is such an inspiration for so many people, including myself.” 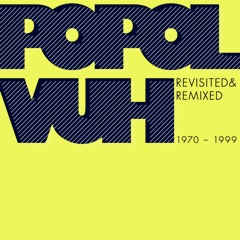