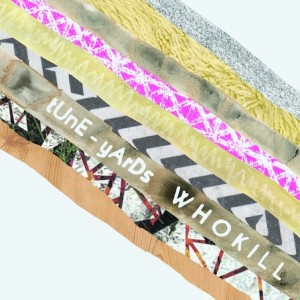 Though the internet, in theory, has allowed individual musicians to blur boundaries like never before, it’s still not incredibly difficult to categorize most bands. Most can fit under the now typical labels of techno, house, indie, electro, dubstep – even more precise tags such as chillwave. But Tuneyards, the latest project from New England’s Merril Garbus, now residing in Oakland, California, is definitely something of an anomaly.

The easiest way to describe Tuneyards’ sound and aesthetic is perhaps through comparison to that of David Byrne and Talking Heads. Like Talking Heads, Tuneyards melds together African rhythms, funk, hip-hop-style sampling, traditional pop, and experimental art rock to create a schizophrenic, scattered sound. Renowned for the intensity of her live shows, Garbus pushes her voice to various extremes on Whokill, from soft spoken word to chaotic screaming, usually accompanied by bassist Nate Brenner, the other permanent member of the Tuneyards project, as well as horns, saxophone and ukulele.

As well as California and New England, Garbus has spent time in Montreal and Africa, and the latter experience is showcased in ‘Gangsta’, a song that appropriates African percussion while exploring the complexities of masculinity. ‘Riotriot’ has roots in the style of bossa nova, with hints of ‘Girl from Ipanema’ buried in its airy chords, while ‘Bizness’, the album’s first single, explodes in a fury of layered saxophones. ‘Doorstep’ channels ’60s girl groups through Tuneyard’s cross-eyed lens, while ‘Wolly Wolly Gong’ could have  been written and performed by Kimya Dawson.

Provocative from the off, once you’ve let Whokill in it’s difficult to ignore. Its opening track, ‘My Country’ is as intense as the album gets, addressing Garbus’ struggles with American privilege, a relatable feeling among many people of her generation. Elsewhere on the album, she examines gender, race, body image and police brutality, and confronts each issue with a knowing sense of swagger that borders on the theatrical. But even at Whokill‘s most lavish, Garbus never appears out of her depth – whether taking on the role of as a singer, musician, performer, woman or storyteller, she always succeeds.