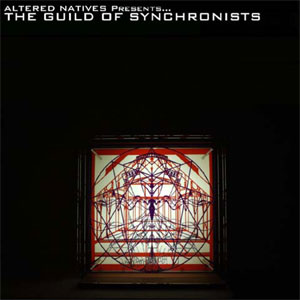 Label compilations are strange beasts. Sometimes, they can mark the point where people outside that label’s particular sphere sit up and take notice – Hyperdub’s 5, for instance. Other times, they feel more precise than that; celebrations of a particular moment in time designed to give fans that have experienced it with them some additional material – Night Slug’s All-Stars compilation, for instance, released after a break-through first year as a label. One thing that does seem to bind them, however, is an approach that’s at least half-way retrospective.

Not Altered Native’s Eye4Eye label. As those who followed Natives’ journey from London’s broken beat and house undergrowth to a wider audience last year will know, he likes to do things differently. His music’s uncompromising; an iron-plated chimera of various genres that’s tough on the surface, but inside melted down and remolded beyond recognition. As for his approach to getting his music out there… well, let’s just say that less than six months after releasing his breakthrough album, Tenement Yard Vol 1., he released another one. As I say, uncompromising.

Rather than looking back,The Guild Of Synchronists acts as an introduction to various acts scheduled to release on Eye4Eye in the future (previously, the label has only released material by Altered Natives and Ceramic). Chances are, you’ve heard of very few of them, so there’s no preconceptions here. It’s like watching an Under 21s football match – it’s refreshing, there’s nobody you’ve already made up your mind on, and you leave full of hopes for the future; some of which inevitably will, and won’t be fulfilled. At One’s piano-led ‘A Possible Lover’, El Sudor’s ‘Hermit’, full of shuffling drum-fake outs and rooftop chords, and the rolling midnight bass of Grayz’ ‘Dubskank’ provide immediate highlights, but rather than a showcase of individuals, Guild Of Synchronists feels very much a collective effort, carefully sequenced between the most delicate and deranged extremes of the Eye4Eye spectrum. Your favourite tracks will depend on your own personal preference, as the quality is remarkable throughout.