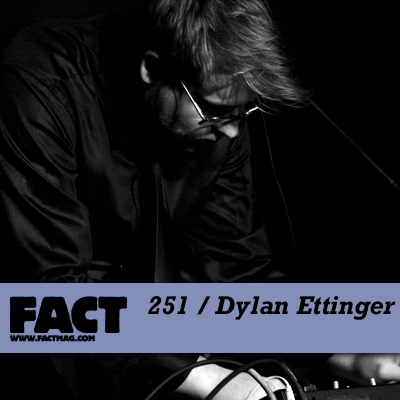 FACT mix 251 is a selection by Dylan Ettinger.

When the Indiana-based artist first agreed to put together a mix for us, he made clear his intention to celebrate the type of  “really romantic new wave tracks” that have inspired his forthcoming album (working title: Lifetime of Romance). It’s all a far cry from the elegiac drift-psychedelia of his 2010 breakthrough on Not Not Fun, New Age Outlaws: Director’s Cut, one of FACT’s top albums of 2010. Rather it has more in common with his most recent 7″ offering, ‘Lion of Judah’, a remarkable dub-informed synth-pop confection that sounded like Augustus Pablo helming early Human League.

“I think I’ve always been a pop musician at my core,” Ettinger tells FACT. “Even when I wanted to make ‘noise’ music or whatever, I had to struggle to suppress my melodic tendencies. I’ve slowly started to find my own ‘voice’ in the way I use my synthesizers and in how I construct melodies.”

Appropriately enough, FACT mix 251 is full of synth-driven acts with their own highly distinctive voice and character. There are gems from such chart-topping 80s acts as OMD, Visage and Depeche Mode, the latter captured in their early incarnation when Vince Clarke was still at the controls, and a brace of tracks that could’ve, and should’ve, been as huge as anything by those celebrated British bands: Deux‘s ‘Game And Performance’ and Ruth‘s ‘Roman Photo’, both recently reissued (by Minimal Wave and Angular respectively).

While much of the tracklist is occupied with vintage material – Chrisma, Chris & Cosey, The Stranglers, etc – there’s room for sympathetic (post)modern material from John Maus, Martial Canterel (one half of New York’s Xeno & Oaklander) and Ettinger’s NNF labelmate Xander Harris. It’s a celebration of pop music at its most human and – paradoxically – most otherwordly.  “I’ve always liked music that sounds like it wasn’t made on this planet,” confirms Ettinger.

For more information on Dylan, be sure to read our in-depth interview here.