Perc: ‘My Head is Slowly Exploding’ 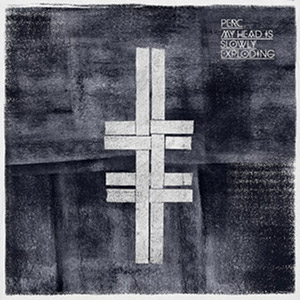 Techno is steeped in historicity. Indeed, for a while it was the defining characteristic – ironic for a genre supposedly so forward-looking. However, the working from the past had until recently trodden fairly well-worn paths – either the Belleville Three and their own nods to synth-pop and Parliament or the steely looped groundwork that Mills laid with the Purpose Maker series.

For a while now, though, there’s been a drawing from a different well-spring of inspiration; mostly UK techno producers, but also a few others, paying homage to the industrial’ 80s. Be it invoking Throbbing Gristle’s tape experiments, or drawing on the shimmering reverb-heavy patina of classic 4AD, or simply hammering out on metal in a nod to Neubauten, it’s unquestionable that a period and series of genres previously considered pretty unfashionable are now providing ample grounds for influence on a recent generation of producers.

Early precedents were set with Downwards, previously a none-more-resolute techno label, moving into post-punk and cut-ups on their 7″ singles as early as 2000, as well as the more overt likes of Surgeon dropping in noise agent-provocateurs Whitehouse over rigid rhythms, or on a more extreme level Russell Haswell mixing Mills, Doom Metal and Merzbow to blistering effect. This has lead others to continue and develop the influences, as seen on Blackest Ever Black with Regis rubbing shoulders with Raime (who to these ears sound like an update to mid-’80s Muslimgauze) and the dreamy shoegaze of Tropic of Cancer. One recent standout in this melding of influences came in the recent Resident Advisor podcast from Perctrax founder Ali Wells a.k.a Perc, who managed to combine Chris and Cosey and Cabaret Voltaire into a relentless rolling techno mix without it ever seeming incongruous.

In the run up to his album on his own label – a release which promises to develop the industrial influence further – Perc has drawn remixes from two artists at each end of the spectrum to complement his track. His original  comes off more like an early Aphex side on R&S at first, with metallic clangs in the right places, grounded with a steady bass pulse and discordant drones. The strength comes from proving that harsh, dissonant sounding music doesn’t need the high bpms and aggression found elsewhere – despite its factory production line sound, it carries sublety and light space inbetween each hit.

The first remix is from the appositely chosen Ancient Methods, who themselves have been carrying the torch for music with a darker, more physical edge to it over five EPs of heavy ‘war-funk’. Where the original has space between the beats, so AM fill it with grime and dirt, rattling chains and dragged metal carcasses. It’s hard to talk about any differing from the norm in techno without sounding like a candidate for Private Eye‘s Pseuds Corner, but AM’s talent is to cut away the emphasis on the four, welding their at times lumbering ungainly beats to the first and third beats, giving a half-stepped feel and rendering the grinding advance  all the more insistent sounding.

The real coup though lies with the second remixer. Chris Carter, of Throbbing Gristle and Chris and Cosey, bucks expectations and turns in an ever-rotating clockwork model of a mix, harking back to the echoed reflections of the original while building a unique cascade of sounds. The metal of the previous tracks turns into bowed and struck tones, with the grit of the AM mix replaced by an alien, inhuman, self-oscillating rhythmic spiral. Both surprising in it’s willingness to build on techno’s established tropes, and a delight in it’s from the outside-looking-in reconfiguring of said norms, it’s a sign of how techno producers can move onwards from the ‘industrial’ dirt and clatter and forge ahead into doing exactly what the originators of the sound intended – creating alien music sounding unlike that heard before.