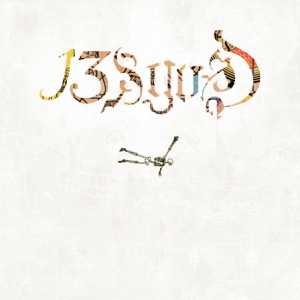 When Run DMC and Aerosmith joined up for ‘Walk This Way’,” they were not only bridging the gap between two sometimes warring styles of music, they were also acknowledging their shared history; the fact that they actually had more in common they did apart. There’s been many times since where the two genres have tried to meet again, but most of the time they ended up sounding like either hip-hop plus rock elements, or vice versa, as opposed to a genuine collaboration [or just Limp Bizkit – Ed]. Not so for 13&God, a long-running collaboration between German indie staples The Notwist and Themselves (a.k.a. underground rap veterans Doseone & Jel) that on this, their second full album, sounds little like their work apart.

The few names from the past decades that do come to mind when hearing Own Your Ghost are people like Anton Fier, Bill Laswell, and the late Hector Zazou, who forged new sounds from unpredictable combinations of musicians on their many collaborative works. On the first 13&God album, it was the songs that didn’t just sound like Neon Golden-era Notwist with Doseone rapping on top that were most exciting (‘Perfect Speed’, in particular), and thankfully its those moments that have been expanded on here; a fully-fledged band of musicians focussing on going beyond what they originally set out to do and succeeding, with a record that’s often sad, melancholy, dark and heavy, but at points bursts with pop potential.

The most striking aspect of Own Your Ghost is just how complex the songs are. ‘Armored Scarves’ is simply a marvel, a song with so many different elements that it’s a wonder it doesn’t collapse under the weight of its ambition. It’s already a beautiful showcase of guitar and Markus Acher’s voice by the time Doseone’s verses flutter into the periphery, but that extra layer vaults the track into epic status. Rather than rapping, Doseone opts for the more delicate vocal work he pursues in Subtle, another of his bands. But that’s not where the elevation of this track stops: by the end, the whole band has formed a chorus of exalting shouts, in perfect harmony with a rhythm beautifully constructed from knee-slapping and hammered piano strings. It’s one of the most impressive balancing acts you’ll hear all year, and when Dose describes time as a “most desperate creature, like you or I, only longer, meaner and most lonely”, that pity and fear that’s deep down inside the track really comes out. Dipping scarves in iron to protect your neck against time’s troubled draw is not only a vivid piece of imagery, but also a nice nod to a more famous hip-hop lyric.

The wistful ‘Old Age’ screams crossover potential, with driving guitar, a soaring chorus and gentle bridges. Even at the Notwist’s weaker moments it’s impossible to deny the beauty of Markus Acher’s voice, but here it’s really pushed to new heights. Along with opener ‘Its Own Sun’ and ‘Beat on Us’, it represents part of the bright, hopeful side of Own Your Ghost. ‘Sure as Debt’, on the other hand, is one of the album’s most eerie tracks, with Dose’s guttural rap finding a sparring partner in its distorted, complex drum track. ‘Et Tu’ and ‘Death Minor’ are equally dark, with the latter being a Crippled Black Phoenix-esque exercise in doom-folk.

Although the distinctive nasal rapping of Doseone and the Notwist’s lunar instrumentation both feature heavily, nowhere on this record do you hear anything that simply sounds like one of the two collaborators tacking on elements from the other. These ingredients, instead, are used like pieces of thread, strategically woven to form a new cloth that’s frayed in some places and brand-new in others; bright and subdued in equal measures but always compelling.