A new limited 7″ on DFA sees US post-punk legends Pylon being reinterpreted by Deerhunter and music critic-turned-remixer Sacha Frere-Jones.

DFA has been instrumental in canonizing Athens, Georgia outfit Pylon, having reissued their two albums Gyrate (1980) and Chomp (1983). Deerhunter mainman Bradford Cox, who was born in Athens, has cited Pylon as one of his first musical loves, and here his band offer up a cover version of their elders’ debut single 1980 single, ‘Cool’. On the flip, Frere-Jones – best known for his writings on music for The New Yorker – adopts his Calvinist guise for a remix of ‘Yo-Yo’, utilizing a new vocal from Sleigh Bells‘ Alexis. 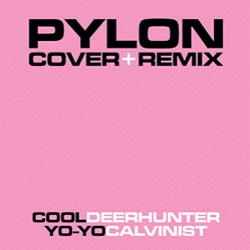