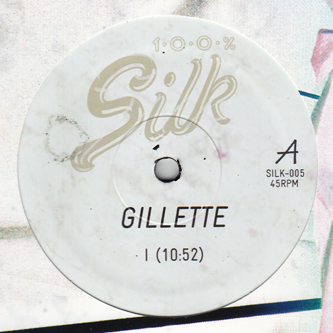 I’m not sure where I stand on 100% Silk. When it was first announced that Not Not Fun’s Amanda Brown was starting a 12″ sub-label dedicated to dancefloor cuts, I wet myself with excitement, but when it came to it I was rather unconvinced by the first three releases (from Ital, The Deeeep and Cuticle). I suspect Partly it has to do with indigestion: profligacy is at once NNF’s most distinguishing qualities, but increasingly also one of its most irritating weakness, and not five months since 100% Silk opened its account, we’ve had six (six!) 12″s enter the world already – I’m sorry, but that’s just too much.

Anyway, the latest brace of 12″s (there’ll probably have been another two by the time this review is published) are closer to what I’d hoped for from the label, particularly the self-titled three-tracker from Gillette. 10-minute opening jam ‘I’ has that tried and tested squelchy horror soundtrack thing going on, but is more minimal, tense and dubbed-out than anything from Umberto or Xander Harris, its groove pleasingly elusive and oblique – the kickdrum sporadically goes rogue, destabiling the governing disco chug into a kind of CD-skip schaffel. ‘II”s utopian aerodynamic flow and utopian melody suggest a deep appreciation of Neu!, Autobahn-era Kraftwerk and even mid-noughties Kompakt – it’s a bit too nice, truth be told, but as kraut homage goes it’s perfectly commendable.

The highlight of the EP is ‘III’, a tough, stripped-down and funked-up electro killer which is ultimately compromised by the self-conscious griminess of Gillette’s production. See, I’m all for making stuff sound lo-fi and charity shop-soiled, but does that strategy really work when it comes to dance music? Much as I like the music on this 12″, I can’t help but feel I already feel that I own enough records that sound just like it, and without that voguish patina of hypnagogy which makes things interesting in the short-term but – if you ask me – highly disposable in the longer arc of things. You’ve got good ideas, Gillette, so what are you afraid of? Let’s have some clarity, let’s have some punch.

But my real problem with this 12″ has to do with structure: great dance music is about pacing and narrative, tension and release; Gillette, unfortunately, lacks any great sense of ‘floor dynamics and tries to wing it on the trippiness that naturally arises out of repetition. The results are enough to satisfy the kind of improbably decadent yet cerebral dancefloors we all privately fantasise about from time to time, but will send any real club crowd out to the smoking terrace.