Released via Glasgow’s Numbers imprint, the limited edition  ‘Far Nearer’ /’Beat For’ is pressed on heavyweight 12″ vinyl, housed in a fluorescent inner and die cut outer sleeve. Both tracks have existed for months now and will be familiar to fans: ‘Far Nearer’ with its carnival-ready steel drum pattern and “I feel better when I have you near me” vocal sample, ‘Beat For’ with its serotonin-depleted rave vamps.

The record arrives as Jamie prepares to go into the studio with Canadian rap star Drake, to work on what will surely be one of the most anticipated releases of 2011/12. You can catch your man spinning tunes alongside Jackmaster and Spencer on the Numbers radio show on Rinse FM this Tuesday, 7 June, 11pm-1am.

For more information and to order ‘Far Nearer’/’Beat For’, visit the dedicated website here. 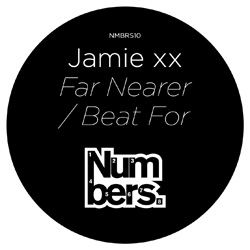