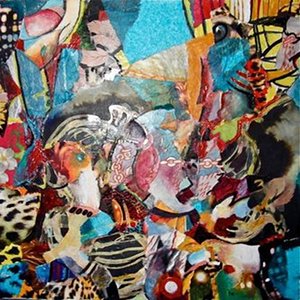 It’s ironic, really. Techno as a genre, or as a movement/ideology, depending on how pretentious you’re feeling, is rooted in the most primitive rhythmic element that there is; a motorik pulse, locking in to the heartbeat of the listener. And yet more and more it draws its influences from some of the more experimental and avant garde music and art from the past, whether classical minimalism, noise, electro-acoustic music or Burroughsian cut-ups. There’s almost a need to justify the reliance on the perceived simplicity of the beat by drawing from and working through bigger, stranger ideas.

This album from UK techno figurehead Surgeon comes clad in name-checks to Sun Ra and avant-garde composer Eliane Radigue amongst others – and his past form suggests this is more than lip service, with his DJ sets regularly featuring the likes of Whitehouse and Coil. However as a producer he’s been notably quiet of late, with only two EPs in the last five years (excluding a live 12″) and no album since Body Request from 2000. While still highly prolific as a DJ, has the hiatus damaged his flow? Can he translate these explicitly stated influences into a cohesive whole?

The answer is a fairly emphatic positive. To these ears anything Surgeon releases will be judged against his 1999 Tresor release Force and Form, an album with four tracks but more than twice as many “movements”, which blended his uncompromising rhythms with Coil-influenced electronics and which for many is the pinnacle of what can be achieved with a techno album. Breaking The Frame is slightly more conventional in that it consists of seperate tracks which, while highly cohesive and consistent, still on the rare occasion sound like a collection of tracks rather than a complete body. However the quality of the material make these concerns fairly redundant.

It’s notable that another recent “big” album, rooted in techno and with a distinctive aesthetic, Sandwell District’s Feed-Forward, used a softening of the sound to translate previously more abrasive sounds into a package better suited for home listening, in particular drawing influence from the Berlin style and a perhaps surprising nod to the classic melodic UK techno of the mid ’90s. Desite there being tracks on Surgeon’s release with the titles ‘Presence’ and ‘RADIANCE’ – both also the titles of Basic Channel tracks – there’s no attempt made to tone things down, to compromise or make more palatable. Indeed, the double timed drums of ‘RADIANCE’ are amongst the hardest end of anything he’s released.

Likewise, the tracks shorn of rhythm – opener ‘Dark Matter’, the rippling, Alice Coltrane inspired harps of ‘Presence’, the sickly analogue drones of ‘We Are All Already Here’ – are no ambient filler tracks; they show depth of sound design and menace that partner them ideally with the heavier tracks. “Menace”, perhaps, is even the wrong word – this isn’t “dark” techno, all growling subs and over-distorted kicks, instead it’s an alien, unfamiliar feeling, exemplified in album closer ‘Not-Two’, which despite field recording and massed wordless choirs, still fills the listener with the feeling of being confronted by something terrifyingly unknowable.

The beat-heavy tracks, while amongst the best Surgeon’s recorded, suffer slightly by comparison, being as they are closer to his previous output. Which is not to damn them with faint praise – this is steely, depth-laden techno with real feeling and emotion invested in them. What sets them, and indeed the whole album out, is the process of building on tropes already established. ‘RADIANCE”s shimmering metal-hammered riff references his ‘East Light’ 12″, whilst the harps on ‘Presence’ sound like an updating of the atonal synthesised pluck that runs through his ‘Basictonalvocabulary’ debut. ‘The Power Of Doubt’ could be a remodel of one of his Counterbalance 12″s whilst there’s a calling back to his Downwards releases in ‘Those Who Do Not’. But these are references, now updated and built on, to give a more complete artistic sound; a drawing together of the work in the past to point to where future work will lead. This makes tracks that take a slight tangent seem just as relevant – ‘Transparent Radiation’ riffs on the half-step dubstep rhythms and querulous synths that have featured for a long time in his DJ sets, while ‘Remover of Darkness’ sounds more like Autechre than anything else.

Overall there’s a feeling of summation to Breaking The Frame; a summary of what’s come before, with the best parts distilled, and a setting out of what’s still to come. Dystopian as the atmosphere within the tracks themselves seems, the future for Surgeon’s own artistic development looks very bright indeed.