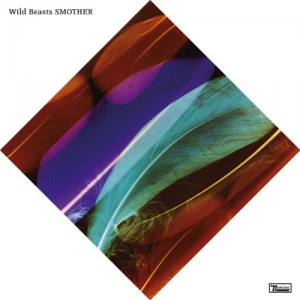 A YouTube comment on ‘Treacle Tin’, an early b-side by Wild Beasts, reads, “all I want is more of that dizzying, cracked insane falsetto!” And that is all I ever really want, at least from Hayden Thorpe. Early Wild Beasts records are amongst the best that contemporary indie has produced. Their second album, Two Dancers, I was fairly keen on, as it so perfectly captured the sound of an easygoing, slightly posh summer: strawberries and chardonnay and all that. But I always hoped in my heart that they’d go back to the raspy, imploding soul songs of their salad days.

Well, they haven’t. Smother is as soft an album as you could find. Everything is muted and afraid to be pushy. At moments, this does work. The last track ‘End Come Too Soon’ (which is questionable) does have an ethereal, lackadaisical charm, and a profound heaviness acquired from the emptiness of these deliberately light tunes. But it feels like Wild Beasts using their obvious talent to its utmost to create one exceptionally good song in this new style, whilst the others feel pretty spot on 7/10. I still don’t think it’s the optimum sound for them, compared to the genius of their first album.

Smother does have its moments, and ‘Plaything’ in particular has a gentle, cautious charm. Wild Beasts still have some of the best lyrics about sex (“new squeeze / take off your chemise / and I’ll do / as I please”), and Hayden Thorpe’s lyrics in particular about the subject are always playful, informal and open; the intimacy he creates with them containing immense power. More than anything, ‘Plaything’ feels like overheard whispers between lovers, in sharp contrast to ‘Bed of Nails’ with its sixth form-y refrain of “our love, Frankenstein in nature and design / like the Shelleys on their very first time / when our bodies become electrified / together we bring this creature alive.’

‘Burning’ is the album’s most sonically interesting song, featuring this echoing trill swarming above isolated, dispersed single piano hits. But elsewhere the album is scarcely better than your average indie band. Opening track ‘Lion’s Share’ is really not that far from Coldplay, bluntly. I don’t think this kind of music is what Wild Beasts are best at, and it’s a shame to see them committing themselves to this route permanently.