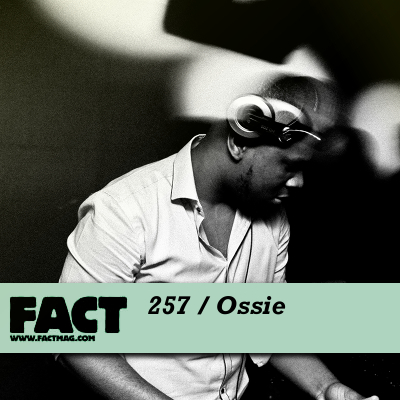 This Friday’s FACT mix comes from one of the brightest talents in UK house music, East London’s Ossie.

If you’ve listened to underground house favourite DJ Petchy at any point in the last eighteen months, there’s a good chance you’ll have heard Ossie’s ‘Tarantula’. A beauty of a track, built on gloriously natural percussion and slide rule synths, with the support of Petchy and others it became an anthem on Live FM and other London pirates, before being snapped up for full release by Lightworks, a new label formed by Reecha (Dirty Canvas/No Hats No Hoods) and Jon Rust.

This month, Ossie followed it up with arguably an even better second single, the vocoder-led ‘Set the Tone’ on Hyperdub. He also played a show-stopping closing set at our recent party at Cable; time, thought we, to ask him for a mix.

What’s key with Ossie’s productions is that instinctive, live sounding percussion he uses, and his love for natural drums also comes through in his FACT mix. Blended to perfection, they melt and slip into each other like butter. Download the mix below, and check page two for a short Q&A with Ossie.

We know your tunes, but don’t know much about your background. Tell us about yourself, and how you started making music.

“I’m a music producer and DJ from East London and I’m 22 years of age. I started making music when I was about 11, primarily making r’n’b and hip-hop with friends. I did that throughout school and college and was learning to play the piano at the same time. I got into house music about four years ago and it’s kind of taking over.”

We first heard your tracks circulating on Live FM and Déja Vu, and a couple were available on UKFunky.com. Is it that corner of UK house/Funky that you’re coming from?

“Yeah UKFunky.com was just one of the avenues I used to get my music out. When I started making house, i had no idea what to with tracks I was making so I just put them out on social networking sites like Soundcloud and MySpace. At the same time I was sending them to DJs that I know of who happened to have shows on Live FM and Déjà Vu which was a massive help.”

You’ve got those tribal, almost live sounding drum patterns down pat. Is that something that comes from getting into Funky, or is it a love of African music, or what? Do you have a background in drumming? They sound really natural.

“No. I’ve got no experience in drumming, I wish I had taken drumming lessons. African music is probably the start of it all, my parents listened to a lot of Fela Kuti, Tony Allen, Quincy Jones and Stevie Wonder when I was younger and in turn I did. In terms of producing house music I was listening to Basement Jaxx, Bugz in the Attic, Vikter Duplaix and 4hero, and their music is swamped with percussion instruments, live drums and fat kicks and snares. I started out cutting up samples from Logic and manipulating the sounds to make my own live drums. Thats mainly how ‘Set The Tone’was made.”

There’s that quite vintage, classic feel to a lot of your tunes too. Do you listen to a lot of older house?

“Not really older house tunes per se, just old tunes. Its quite easy to incorporate the r’n’b and hip-hop I used to listen to and make when I was younger and fuse it into house music. That’s really what I’ve been doing.”

How did ‘Tarantula’ come about? That’s your biggest track at this point.

“Tarantula was one of the first house tracks I produced back in 2009, I gave it straight to DJ Petchy and he was playing it on his Live FM show constantly. After six months a little buzz came from it and at the same time I had put up a video on YouTube to help. The guys from Lightworks approached me in July ’10 and were interested in releasing the track. Then we went from there.”

The Hyperdub single’s up next – what else have you got in the pipeline?

“I’ve haven’t planned the next release, I decided I’d wait a couple of month after the Hyperdub release and concentrate on DJing for a bit. I’ve got a couple of remixes to do for a few artists so that should be fun.”

Finally, tell us about your FACT mix.

“These are just tracks you’ll find in my set when I play out, including tracks from my Hyperdub EP and the spontaneous remixes I like to make.”