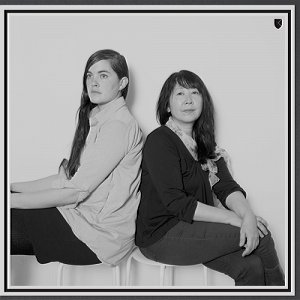 Julianna Barwick & Ikue Mori shared some cubicle space in a Manhattan gallery to lay down their four tracks for RVNG’s FRKWYS series, where the label pairs an “old” creative maven with a “young” impresario. The resulting pieces of music certainly feel like they were created in an art space (not necessarily a bad thing), as the tracks invoke abstract ephemera and construct a hollow, echo chamber of art-viewing space as its stage.

There are no discernible words, but plenty of Barwick’s looped vocals, which is the most consistent throughline of the work.  Most voices, both literal and metaphorical, are judged by their ability to express something specifically. Barwick’s voice is gorgeous because it can express an expanse of history and thought without ever landing on a specific emotion or concrete verbal element like a word. In this case, the combination of Mori’s production with Barwick’s vocals definitely pushes the singer out of her more secular hearth spaces into something less bedroom-specific.

Mori treats us to a panoply of flavors from her bizarro soundbank: plodding thumps, wind chimes, birds tweeting, splats, wooshes, strings filtered into alien transmissions, foley footsteps that morph into the sounds of mutants masturbating. The best connection is that Barwick is the leading lady and Mori is, well, David Lynch. We are guided down an eerie path that meanders and doesn’t seem to lead us anywhere but in and out of different aural rooms, the persistence of the voice dictating the emotional variations. We’re not sure where, if anywhere, this is leading, but like any of the Eno classics, it seems to be about different spaces rather than particular narratives, and the bending and shifting of objects/people/voices as they pass through these spaces.

It’s tough to tell how much preparation or communication was had before the recording. It feels effortless and intuitive, refreshing and confident. For someone who listens to hours of beat-driven music a day, this is a welcome detour.