Jam City is soon to release a new EP, Waterworx, through Night Slugs. Rather generously, the label seems to have uploaded clips all of its tracks to Soundcloud for you to preview.

First impressions are good: it opens with ‘Aqua Box’, which comes over like toughened-up, tom-heavy Chicago house until an obscene electro bassline torpedoes in, but far more striking is the harder-to-categorise ‘Countess’, a puzzle of broken drums, spidery arpeggios and squealing drones. The pensive yet propulsive ‘Island’ has been floating around for two years and has lost none of its lustre, while ‘Barely A Trak’ and ‘Waterfalls’ are party house cuts, the former admitting a hefty grime influence in its stop-start rhythm and day-glo synth splatter, the latter channeling some of the starlit romance and melancholy of the Virgo Four.

We expect Waterworx will drop on 12″ and digital some time in July. 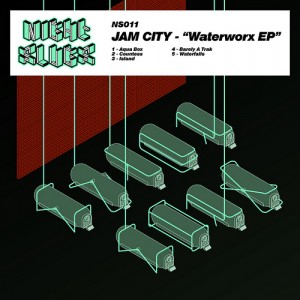