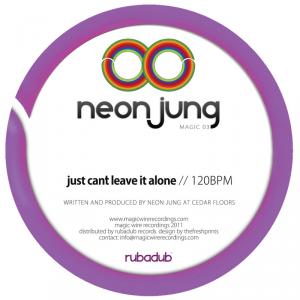 Nottingham artist Lone has set many a tongue wagging in the last two years with his hi-res, fantastical takes on classic club styles. But on the third outing for his Magic Wire label, it seems his impulses are catching on.

Neon Jung is the first artist other than Lone to take a hit for Magic Wire, and from the first succession of bleeps and synth sweeps on ‘Just Can’t Leave It Alone’, it’s clear that his rave tackle has been marinating in a similar lake of ideas as the label’s boss. Neon Jung might be a new face on the block – previously he’s released a handful of tunes under the name Keaver & Brause, and collaborated with Lone as Kona Triangle – but he already sounds like an old techno hand, gradually teasing out the beat.

‘Just Can’t Leave It Alone”s undercarriage might be a rickety broken house lope, but it carries some serious weight, holding up melodies like weeping rainbows, hip-hop samples, sirens, reversed synths and more before a bassline that sounds like a high security prison’s drafted in to lighten the load. B-side ‘Too Many Facets’ is arguably even better: pitched-up moans stagger through a shower of synth stabs before a tough, acid groove swallows the whole thing up. There’s almost too much happening for your ears to grasp on to, but with a couple of deft production tucks, Neon Jung perfectly balances this glut of ideas, occupying a space somewhere between the rough bumps of classic house and hip-hop and the raw emotion of hardcore.