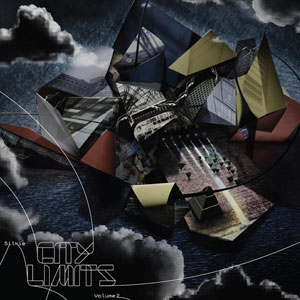 There came a point where dubstep had to change. After a rapidly evolving first seven years a good proportion of the music seemed to grind to a halt, weighed down by derivative tracks whose signature wobble and stomp had grown stale. The sound was imploding like a dying star with much of its light and energy being sucked into a joyless black hole. Anti-Social Entertainment (Jay 5ive, Quest, Silkie and co) however, relative veterans at this point in dubstep’s history, have continued to fight the good fight, filling this void with modern soul motifs. Silkie has had the most prolific output of the collective so far, with memorable singles like ‘Purple Love’ and 2009 album City Limits Volume 1 setting the stage for his latest long player.

Sounding suitably like the follow-up to the first edition, City Limits Volume 2 is built for urban cruising, smoothly and unhurriedly navigating slick streets. Songs like ‘Lucky’ and ‘Unmastered’ (featuring Skream) open with spare beats and gritty bass riffs that contain just the right air of danger, before cutting through that tension with a succession of rich melodic layers, jazzy piano licks and uplifting synth runs. It’s stealth soul, funky when you least expect it. ‘Snowed In’, a collaboration with France’s Von D, sounds like signature Anti-Social music: garage-y vocal whoops, digital saxophone notes and tuneful Rhodes chords that drop in and out between punchy bass hits and shuffling rhythms.

Something that distinguishes this album from its predecessor are the added hints of nostalgia and odes to raves past: ‘Get Up N Dance’ sounds like Benga doing speed garage, while ‘Selva Nova’ bends Amen drum breaks into a 140 banger. ‘Boogie Boy’ meanwhile is retro electro-funk anchored by drum machine claps and stabbing keyboard flourishes that seem built for fluid pop-lock dancers. However, vocalists are noticeably missing from proceedings. By the album’s fifth track you’re ready for a diva to let rip or a crooner to soothingly break the instrumental spell, something that doesn’t happen save a few sample snippets. Still, what really stands out throughout Volume 2 – and softens that desire for a vocalist – are Silkie’s swinging lead synth notes, that at times resemble Stevie Wonder’s ’80s period keyboard mastery. Silkie doesn’t quite have Wonder’s genius touch or songwriting prowess, but two albums deep now, the Anti-Social don seems in control of his craft and leading the charge for change.