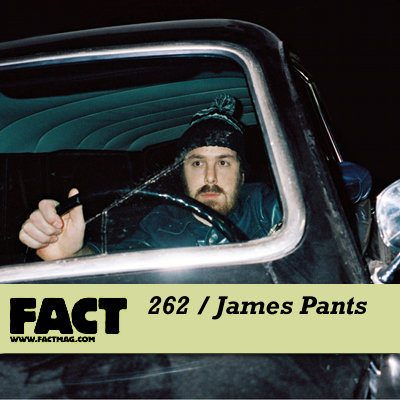 This Monday’s FACT mix comes from one of the most unique and frequently rewarding characters in contemporary pop music.

As the legend goes, James Pants got his break when leaving his high school prom to see Stones Throw boss Peanut Butter Wolf play in Austin, Texas (with date in tow, naturally). The two had already communicated, and clicked when they met: Pants took Wolf record shopping in his hometown that same night, and would go on to intern at the label before releasing several singles for them.

Pants’ first full album for the label came in 2008, with the classic boogie of Welcome, but for us it was the arrival of 2009’s Seven Seals where the now-Washington resident stepped things up, with a breathtaking, minimal wave-inspired record that would’ve been one of FACT’s albums of the year had we not discovered it in January ’10 (it wasn’t given a full release until December).

This year, Pants released his third full-length, the recently Essential-ed James Pants, described by FACT’s Nicky Hutchinson as “the work of a record collector as much as a musician, but its melodic exuberance and unerring momentum forestall any accusations of detachment …  the kind of “indie” record that no one in an actual indie scene has the chutzpah, style or force of personality to make themselves anymore”. To celebrate its release, James Pants has delivered a FACT mix. As you might expect from someone with taste as diverse and deep as his, we haven’t heard of half the artists it features. We wager you won’t either, but that’s half the fun of a DJ like this. All that matters is that it sounds great. Enjoy.