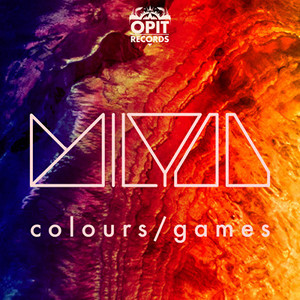 Usually as artists start to accrue a following they earn the freedom to colour outside of the lines and just, well, get weird. The thing with Kentuckian producer Milyoo is that he was pretty damn weird to begin with. What to do when you make your name off of the most anaerobic, abstract-hip-hop-cum-fractured-IDM this side of the Brainfeeder camp (probably a better side, to be completely honest)? Why, start making house, of course. That’s exactly what Tommy Wilson has started to do with his 2011 release onslaught. Following releases on Saigon that showed him bringing his sprawling and sample-heavy approach to long andwinding house frameworks, Milyoo returns to Subeena’s Opit label – where he debuted almost exactly a year ago – with two bursts of compressed, take-no-prisoners house music.

The first thing that’s apparent about ‘Colours’ is its feel: it’s powerful and slamming, but anorexic. The result is a garage-esque pattern that slices diamond-sharp right through whatever it’s mixed in or out of, and once it finally lands even Wilson’s trademark alien gasps are held in line by rigid percussion and steamrolling bassline. By the time the chords start to bubble their way up to the surface, it sounds like a straight-up dancefloor track, no mean feat for the same man who made the almost nausea-inducingly off-centre ‘Dasein’. ‘Games’ takes that same slightly garagey beat and abuses the Hell out of it, sticking in detuned chord progressions wherever they can fit (or not), as chords stretch and pulse in the background like a melting horizon. It’s abstract, it’s expectedly bizarre, but it’s surprisingly functional, and certainly physical: this is a new Milyoo, more sharply focused than ever before, ready to take over your dancefloor. With an album coming later this year on Opit, well, God help us all.