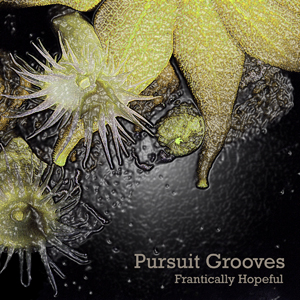 Rapper, singer, producer: Vanese Smith is that rare thing in modern music, a jack and master of all trades. In fact I wouldn’t be surprised if she penned rhymes in one hand while feeding beats into her SP505 with the other. On Fox Trot Mannerisms, her last release for Pinch’s Tectonic label, she applied the same versatility to both genre and tempo, providing her own unique interpretations of hip hop, broken beat and house.

Frantically Hopeful picks up where Fox Trot left off. Opener ‘Revolutionaries’ packs quite a punch, a deceptive false start leaving us in no doubt that we’re playing by Smith’s rules. A defiantly discordant rhythm arrives, chafing against Smith’s soulful vocals; a juxtaposition between rough and smooth that is a recurrent theme of her music. ‘Type Send Universe’ is like a real-time exploration of how far she can take her cut ‘n’ paste mentality to beats, centred around a loop that sounds like a needle skipping in the groove of a forgotten funk 7″.

Later on the album swings fluidly between the earnest rap of ‘I Sink’ and ‘Clueless’, tracks which cement Smith’s reputation as an intelligent and socially conscious MC in the mould of Yarah Bravo, and more subdued numbers like ‘Peace Talks’, a slice of nu-soul which tips a nod to the experimental beat collages of the Brainfeeder circle. As a musician based in New York, Smith’s music evokes the melting pot of cultural identities that define the city while sparing time to glance over the Atlantic for inspiration. ‘Clueless’ picks up the baton from Bugz In The Attic’s ‘Knocks Me Off My Feet’, while the aptly named ‘Bedazzled’ is a twisted take on UK Funky, killer kick drums and razor sharp vocal samples smothered in sun-drenched chords.

Closer ‘What About’ encapsulates everything that’s great about Smith’s winning formula while also managing to be the best track on the album. The classic break from Bobby Byrd’s ‘Hot Pants’ is chopped up, slowed down to a crawl and spliced with French cinema samples, while Smith’s plaintive cries of “what do you want from me?” linger in the air long after the song’s over. If there’s a criticism to be made of Frantically Hopeful, it’s that some of the tracks feel quite bare: ‘Mars Rising’ in particular sounds like the skeleton of an idea that would have benefited from being fleshed out, but that’s a minor qualm in an album of such commendable originality and scope.