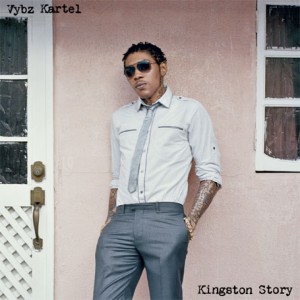 It’s likely that the last time you will have seen him referenced here is for his cheeky-voiced, bit-part role on Major Lazer’s ‘Pon Di Floor’, but it should be known that Vybz Kartel is the biggest, most influential dancehall artist in the world today. While it would be pointless to try and elucidate his exponentially dominant presence in dancehall over the last 18 years in this article, his very reason for being reviewed here is an occurrence that deserves some reflection before Kingston Story is considered on its own merits.

It’s Mixpak Records owner Dre Skull’s involvement as producer of the album [and all this – Ed] that is resulting in coverage from a wider spread of publications than Vybz is used to, as the majority of Dre Skull’s productions to date have been far more house related than anything else. However, with Kingston Story being very much a dancehall album and not a Major Lazer genre-mash, it produces an interesting question regarding the nature of dancehall’s regard and coverage by music media.

When asked to contribute to this article, Gabriel Myddleton, founder of London’s groundbreaking dancehall collective The Heatwave, was at pains to set some caveats first: “Vybz Kartel is one of the biggest artists in the world: one of the most talked about, most prolific and most talented. He is without doubt a musical and lyrical genius, and on top of that he is successfully and controversially marketed, which makes him consistently interesting for fans. Kingston Story does not, and could not fully represent Vybz Kartel as an artist, and it’s a shame that it takes a non-Jamaican album release for international media to give review space to his incredible music.”

He has a valid point. What Gabriel is concerned about is not the collaboration itself, but misrepresentation of an artist and genre as a whole, based on a premise that is unusual, through media outlets that would not normally give them attention. The album format is an undeniable part of this, he explains: “Vybz Kartel puts out singles every week. Although a lot of them aren’t that great, I’m much more interested in these, as it’s in this constant and prolific output where you see his genius.”

“I don’t consider dancehall to be a genre where albums are important. I don’t mean this as a criticism of any media that are covering this album, but I believe the idea that you need an ‘event’ or a ‘product’ like an album in order to justify giving careful and deliberate reviews to the music of an artist like Vybz Kartel is outdated and outmoded. The way the music industry is in 2011, with easy access to mp3s, videos and so on, means you shouldn’t need an album release with a coordinated marketing campaign for people to pay attention to an artist of Kartel’s caliber.”

“It reflects on the Jamaican music industry too, because the bottom has dropped out of the vinyl and CD market. It has meant that artists’ only way to get their music out there is via free distribution of mp3s. It’s a shame because it makes it so hard for the incredible talent coming out of Kingston to get recognised on an international level. Jamaica has been at the forefront and cutting edge of music for the last 50 years: no matter how much people write off the island’s contemporary output, it never fails to be judged as incredibly creative and innovative a few years later.”

Frankly, dancehall already gets enough embarrassing, unnecessary and misguided attempts at critical analysis from club music scenes. So we won’t be doing any of that for this review. For the sake of clarity, it should be noted that Kingston Story is simply an individual take on dancehall, with Dre Skull attempting to represent Vybz Kartel through an obvious passion for the artist that he usually is, while also attempting to create something original, and Kartel contributing to something new and different. Anybody listening to it should invest some time to listen to both artists’ individual work.

Kingston Story is, essentially, a dancehall album of a more ’90s-’00s hip hop-inspired style, with a club sound typical of a US listenership. Dre Skull has tried to push an individual character through pairing traditional dancehall elements, such as Fairlight orchestra hit samples, rhythmic trademarks, and strings typical of more modern productions, with a palette of synths that references 80s boogie, crunk and hyphy, and some more idiosyncratic stylistic approaches.

The first collaboration between the pair, ‘Yuh Love’ in 2009, was a total curveball because of these elements. It gained them well deserved attention for being a poignant, goosebump-inducing ballad, largely subdued with moments of drama and very beautiful, pedestrian romanticism in the lyrics. Whether this should have been followed by a whole album, however, is questionable, as it remains the strongest cut on the album.

Dre Skull is an excellent producer technically, and musically the riddims on Kingston Story all possess something interesting and engaging, ‘Jamaica’, ‘Ghetto Youth’, ‘Free Style’ and ‘Push It In’ all being stand-out instrumentals. Kartel, as a separate element, seems earnest and in full swing when delivering ‘Jamaica’, ‘Yuh Love’, ‘Go Go Wine’, ‘Mi Remember’, ‘Ghetto Youth’ and ‘Freestyle’ but less committed on others, breezing through them with half-recycled material from bigger songs over the years. Lyrics from ‘Half On A Baby’, ‘My Crew’ and ‘Breathless’ are below par, meaning that the songs – all potentially good productions – suffer for it as a whole.

The amount of elements that could potentially rub the wrong way for fans of Kartel, fans of Dre Skull, or fans of a particular dancehall sound are therefore numerous. Part of this, admittedly, could just be British preference, and it is easy to imagine this having a better reception in the US. Dre Skull does deserve respect for remaining fairly faithful to dancehall while attempting something new, achieving something quite individual. It is simply a shame that Kingston Story doesn’t hang together overall as successfully as the pair’s first collaboration promised; perhaps if this continuation had been executed as smaller number of finely honed singles the output would have been more consistent.