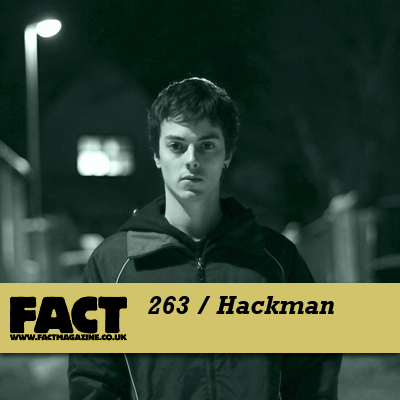 It wasn’t our intention to run a FACT mix by Hackman the day after Britain’s biggest selling newspaper was closed over a hacking scandal. But we are pretty impressed with how the timing of these events worked out.

Phone taps aside, 22 year old Hackman’s been one of the most rewarding artists to emerge from the UK’s ever-shifting dance music landscape in recent years: we first profiled him in January of 2010, and since then he’s continued to impress, with sublime singles for PTN (‘More than Ever’; ‘Made Up My Mind’), various remixes and now a new EP for Greco-Roman that features some of his best tracks to date.

Hackman’s based in Leeds right now but is due to move to Bristol, at which point his forthcoming album for PTN, As Above, So Below will almost be upon us (September release, apparently). His FACT mix features a wide variety of artists – Emptyset, JTRP, J Phlip, Maya Jane Coles, Tessla, Outboxx and more – but shuffles along at a leisurely pace that’s undeniably Hackman, exploring the vivid greens and blues which define his own productions.