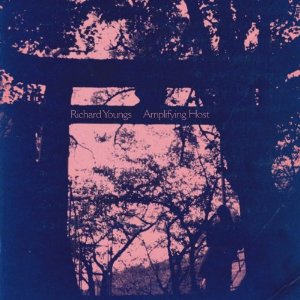 Throughout ‘Joy Ride’, a track from Richard Youngs’ last album Atlas of Hearts, Youngs repeats, “I want to joy ride / joy ride with you”. By the end of the song the lyric becomes so engrained in the listener it is to be believed that Youngs is attempting to tap into a subconscious. Strangely, during this meditative process the pleasantry of the words become lost as the compliment turns to threat, born out of the violent imagery in the act of joyriding. Like the anonymous protagonist of Len Deighton’s 1962 spy novel The IPCRESS File, the dissonance evolves into subliminal instruction. Although softly sung and loaded with humour, the track is arresting. In many ways, Amplifying Host is an extension of the endeavour on Atlas Of Hearts: A pursuit whereby intimate noise and repetition produce jarring effects.

From the album’s opener, ‘Furrows Again’, Youngs projects similar tone as on Atlas Of Hearts – avant garde folk, albeit in a more slackened manner. The vocals meander with hymnal ease providing the track with structure, under which he plays with instrumentation and rhythm: a guitar rings, bends and stops; another plucked; and a cymbal crashing sporadically. As stripped down as this track is, a woozy haze is created, finding comfort in the unpredictable. Guitar parts, looped vocals and drums are all brought in with slight intervals between the other – Youngs upsets what is otherwise a layered anthem creating an enticing unease. Sonically this is Youngs at his most accessible, where the experimentation is masked, presenting itself as laconic or reckless.

The ensuing ‘Too Strong For The Power’ acts as meditation rather than experimentation. There’s a similar set up of instruments but the tones from his voice advance well into the privacy of tongues – rarely annunciating, seldom constructing verse. For the singing is not esoteric, nor inane, employed as sonic device rather than lyrical content. As the track develops Youngs voice becomes increasingly intoxicating. At a recent show he joked about how he had never previously played the light-sensitive synth he was using as his sole instrument but he had been using his voice for 40-odd years and counting. It was a lighthearted yet poignant comment, for in his music, his vocal mastery improves as his career extends. On Amplifying Host the vocals are disjointed, stretched out beyond comprehension, with acres of space between each word and with the words themselves containing single syllables sustained, delaying or infinitely suspending the point of comprehension for the listener.

There’s a reoccurrence of the theme of “joy” on ‘This Is The Music’, Young singing “this is the sound of generations, music of exultations, the time of fulfilment… the joy of joy”. Variations of the phrases are repeated, which, similar to ‘Joy Ride’, load the lyrics with pathos – to Youngs, “joy” highlights its existence as much as its absence. This abstract move questioning the idea of pleasure, enhancing the forms and incorporating his coarse wizardry into the record illustrates the measured progression of Amplifying Host. In this Youngs appears to cast a critical gaze over the utopian ways of folk music: that he is soundtracking Albion with an acerbic dryness, that there’s an acute Britishness to his music – in the Celtic intervals and the John Martyn-styled atavism.

As with many of Youngs’ records, Amplifying Host is highly engaging. It takes the listener and plays with them. The music itself may at times seem casual and formulaic, refusing to escape its relatively simple constriction. A purely aesthetic reading would heavily underestimate the power of the music and the effects it has on the listener. Also, Youngs clearly doesn’t approach records in the same way as many others. Having made so many, they are not a medium whereby he packs in a wealth of disparate ideas as if to paint a complete picture of his thoughts, rather they are a swelling root of his rhizomic thinking. Amplifying Host is a clear extension of the ideas he began to explore on Atlas Of Hearts. It is not aggressively experimental and its only a slight progression. However, what we do hear is Youngs refining his ideas down to a subtle, more accessible sound.