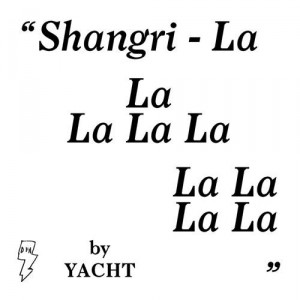 It was only weeks ago that professional doomsday prophet Harold Camping got a bunch of fundamentalist Christians worked up by his declarations that the rapture would commence on 21 May 2011. While his prediction proved sadly unfounded, it hasn’t stopped Claire L. Evans and Jona Bechtolt from constructing their new album around this very human obsession with attaining paradise.

Although not the most obvious concept for your average DFA electro-disco fodder, there’s certainly mileage in exploring the idea of why mankind feels the need to dream up utopian visions of the future. However YACHT have made an LP that doesn’t try to transcend the earthly but instead keeps its feet firmly on the ground, or at least the dancefloor: the sprightly plucked guitar of opening track ‘Utopia’ paving the way for some trademark LCD cowbells and frenziedly strummed bass. ‘Dystopia (The Earth Is On Fire)’ is an inversion on the same theme, dominated by a weighty synth line and ominous Ballard-esque lyrics that describe the collapse of the eco-sphere, re-cycling the chorus of Rock Master Scott’s ‘The Roof Is On Fire’ while altering the cadence just enough for it to be forgivable.

From this starting point the duo go on to tackle such heavyweight philosophical notions as the nature of God and the end of the world, while retaining a softness of touch and a sense of fun that’s impossible to dislike: a bubble-gum pink prism through which Armageddon becomes the ultimate excuse for a party. In between all the posturing they even find time for some misguided romanticism in ‘Love In The Dark’, its plodding Human League style synths accompanying dubious lyrics like “I love you like a small-town cop / Yeah I want to smash your face in with a rock”, made all the more sinister for being intoned in Claire Evans’ sultry voice.

Like Shangri-La‘s accompanying press shot, its overall effect is that of a bizarre mish-mash of ideas that fails as often as it succeeds, most notably in the bewildering appearance of squelchy frat-step basslines, bhangra drums and auto-tuned vocals during low-point ‘High Roller’. There’s also a nagging sense that the ubiquitous cow bells and fidgety bass that sounded so fresh when peddled by James Murphy & co back in 2005, and here form the backbone of tracks like ‘Paradise Engineering’ and ‘Tripped And Fell In Love’, have started to get a little stale. Yet while Shangri-La occasionally sags under the weight of its own convictions, you have to give Bechtolt and Evans credit for the scope of ambition employed here, attempting to create a concept album of dancefloor pop that has a valid message to convey.