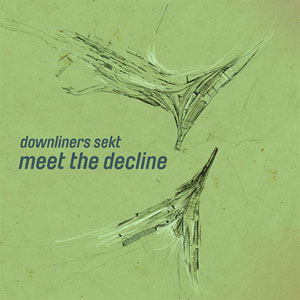 It’s hard to know what to make of Meet the Decline, the third in a series of three dancefloor-encased-in-amber beats from this Andorran/Barcelonan/underwater cadre. It’s good, obviously, but it’s not straightforward in the slightest. Not that Downliners Sekt’s last record, We Make Hits, Not The Public was, of course. But where that quartet of tunes was pretty clearly a post-Burial (or at least post-Todd Edwards and MK, but coming from a similar angle to Burial) set of staggered beats, battered millennial r’n’b and fucked ’90s house reheats, Meet the Decline is more diverse and significantly stranger.

The submerged beats and vocal samples are still there, as is that constant sense of ennui. The Sekt’s evolution, though, has been to grasp hold of the abstract. They were already on the opposite end of the brutality spectrum to what’s commonly associated with dubstep, but are now almost at the point of full-on ambeint, so subdued are the rhythms; the percussion smoothed over like a corpse buried under the patio.

‘All I Can Hear Now’ sets the tone well: familiar enough to existing fans, or interested visitors, with the vocal hook and scraggly beat. It’s just less there, refusing to budge from the upper corner of the room, its rhythm the beating of a moth’s wings against a lightbulb in both its lightness and ever-moving pace. It’s so delicate, and so removed from the norm that its combination of form and theory is somewhat reminiscent of the apparently forgotten Asa-Chang and Junray.

‘Rising Saudade’ follows, and takes things that bit further into the ether. The vocals are more clipped, dissolving into the mix and becoming one with the beat; strung out, knocked out and unable to say no. At first, its two-tone keyboard motif makes you think it’s going to go full-on garage, but there’s such a palpable sense of melancholy here that there’s no chance of going to the club. ‘Locked Faces’ continues the mood in fine style, but real variation comes on the fourth track, ‘Hockey Nights in Canada’, which takes its name from the sometimes heated sport discussion show fronted by Ron MacLean and Don Cherry. Cherry can be a bit of a knob, incidentally. Electric guitar samples add a harder texture to the piece, while the juxtaposition of sports commentary and languid instrumentation recalls Mogwai’s ‘Helps Both Ways’.

All in all, it’s hard to fault Meet the Decline, an excellent record full of fractured beauty. Downliners Sekt may have only been releasing this sort of music since last year (their pre-2010 work was more on a post-rock tip), but they’re already consistantly impressive, and – whisper it quietly – have now released two records at least as good as what we’ve heard from Burial this year.