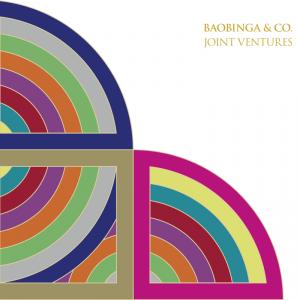 Originally from Manchester, one day Baobinga moved to Bristol and became addicted to collaborating. I say became: he’d already done time as a prolific collaborator, working with regular partner I.D. and more in and around the few more retrospectively unfashionable breaks scene, but it was his move to Bristol that seemed to take that lust for collaboration to the next level. Joint Ventures, Baobinga’s third album, collects highlights from the last two years of singles on his Build label (all but one collaborations, with Hyetal, Scratcha DVA, I.D., Mensah, Guido, Ginz and Cosmin TRG), new tracks made with Gemmy, xxxy, Kowton and more, and remixes by Untold and Roska.

You might expect an album approached in this way to sound scattershot, but Joint Ventures is remarkably consistent, both in the funky percussion and basslines that are clearly Baobinga’s speciality and bind a lot of these tracks together, and also in the sense that a lot of these collaborators are pulled out of their comfort zone, working on Baobinga’s terms. ‘Anything for Now’ finds Hyetal drawing for synth sounds that fans of his early singles will recognise, but he uses them to offset the bottom end of a dancefloor roller as opposed to driving more mournful tracks forward in the way that he’s so used to. ‘Rockfall’ features little emphasis on the purple-saturated synth tones that Gemmy made his name on, instead building up subtle layers of ambience and percussion into rainforest drum’n’bass, while ‘Proper’ forces Kowton to move away from the greyscale, adding some welcome liquidity and colour to his brittle techno-indebted aesthetic.

It’s not all hits here: both remixes are fine, but strike me as unnecessary inclusions, while neither xxxy or Baobinga seem like they’re playing to their strengths on the chugging ‘Barbakan’. Rider Shafique collaboration ‘Gun Talk”s the sort of thing that’s been done a thousand times before. But overall, Joint Ventures is a fresh-sounding album from an artist who should get more props than he does, and one that succeeds as a cohesive, if playful release in spite of its collaborative status.