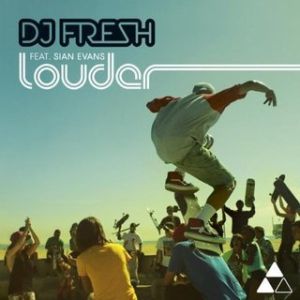 Available on: Ministry of Sound 12″

At this point, DJ Fresh might not exactly be an arbiter of good taste, but there’s no denying that his formula – ever more focused on combining the d’n’b tropes of rushing basslines and pounding drums with the cotton candy synths of trance – is a successful one. Growing a steady commercial following (probably deserved; ‘Lassitude’ was one of this writer’s favourite pop-dance tracks of last year), Fresh precedes his third album with ‘Louder’, his biggest hit yet. Okay, sure, it’s not a drum ‘n’ bass track. However, ‘Louder’ is dubstep’s first number one hit on the UK singles charts. Katy B must be spitting blood.

‘Louder’ is bound to get the purists and the “heads” riled up, outraged that a former member of legendary d’n’b crew Bad Company could ever put out something like this. But the truth is – especially considering the depressing calibre of dubstep that usually penetrates the mainstream’s heart – ‘Louder’ does itself pretty damn well for a number one. Fresh thankfully avoids the dubstep cliche of growling basslines and instead figures the “drop” of a chorus as a literal one, sending the slightly serrated bassline plummeting down into oblivion instead of shredding it into ear-bleeding midrange squawk. The vocal from Kosheen singer Sian Evans is pleasant and generically powerful, and the silly lyrics are naturally lent power by the Tiesto-worthy chord stabs that dot the intro and breakdown.

It’s when Evans says “faster!” and an obedient Fresh suddenly speeds the track back up to drum ‘n’ bass tempo that I’m completely sold though,  a final thirty seconds that’s way too literal to not be profoundly great. Honestly, he deserves this number one: the track is well-produced, catchy, and inoffensive, and all you have to do is listen to the Flux Pavilion & Doctor P remix on the EP to realize how badly this whole thing could have gone in the first place. It took a decade, but there’s a dubstep tune on at number one on the UK singles charts, and hey, it could’ve been so much worse.