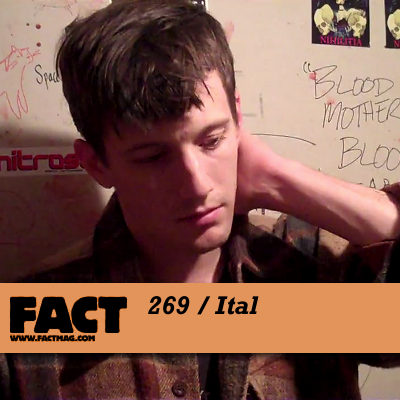 This Friday’s session comes from one of house music’s most promising new artists: Ital.

Ital’s no new kid on the block though; rather, it’s a new alias of Daniel Martin-McCormick, best known for his work as one half of Thrill Jockey duo Mi Ami and his solo endeavors as Sex Worker.

It’s under this current guise, however, that we’ve found Martin-McCormick most fascinating. His first Ital release, ‘Ital’s Theme’ (released this year on Amanda “L.A. Vampires” Brown’s Not Not Fun sub-label 100% Silk) was a raw, acid-eroded gem, produced on Audacity with cymbals and hi-hats made from voice samples and chopped-up white noise. But it was with ‘Culture Clubs’, the first 12″ for Ital’s own Lovers Rock imprint, that things really started to take off. One of the tracks of the year so far, it’s a gorgeous mess of disharmonious elements, rough drums and luscious chords.

As FACT’s recent New Talent piece pointed out, what’s also interesting about Ital is his role at the forefront of a new wave of American artists – among them, Laurel Halo, D’eon and the 100% Silk label – reappropriating classic house and techno music with the anything goes aesthetic of the American underground.

The first FACT mix that Ital submitted captured this approach to a tee, mixed live from a combination of records, mp3s and YouTube footage. The final mix he submitted is a little cleaner on the ear, but no less enjoyable and certainly no less danceable.