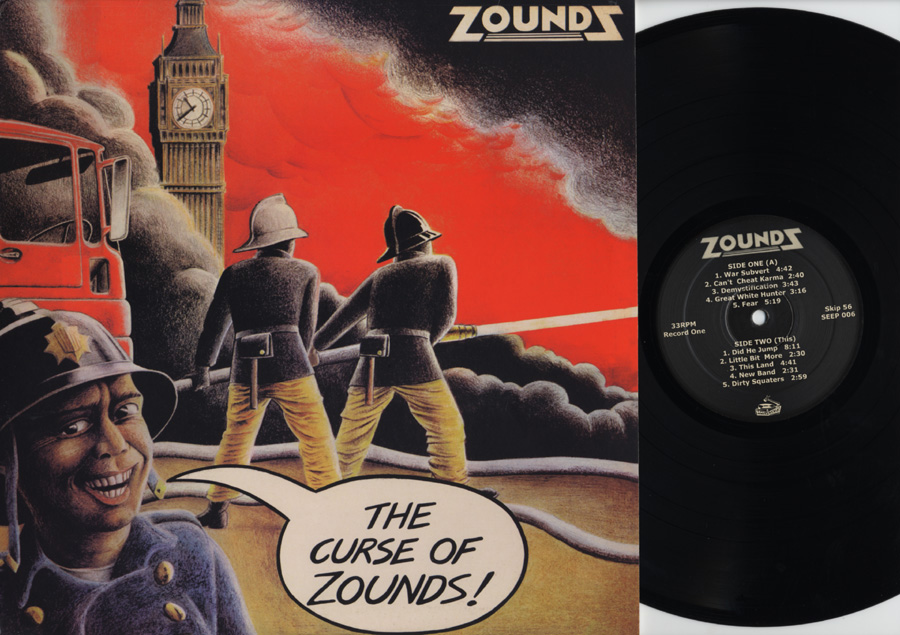 
Zounds’ classic 1982 album The Curse Of Zounds is being reissued by Broken Rekids.

Most of us at FACT weren’t born when Curse, the band’s only official LP in their first incarnation, originally came out. This writer actually first encountered them via JD Twitch‘s excellent 10 Inches of Fear (2008), which featured the Optimo man’s re-edits of their track ‘War’ (alongside similarly inspired second wave Brit-punk from Flux Of Pink Indians, Honey Bane and The Mob).

Self-styled anarchists who were heavily endorsed by their friends and mentors Crass, Zounds – the trio of Steve Lake (vocals, guitar), Paul O’Donnell (bass) and Paul Gilbert (drums) – formed in suburban Berkshire in 1977, becoming a fixture of the squat gig and free festival scene while releasing material on cassette via F**k Off Records. Their first “official” release was the Can’t Cheat Karma EP on Crass Records, featuring what is probably their best known song, ‘Subvert’.

They recorded and mixed their debut album, The Curse of Zounds, in just five days, releasing it on Rough Trade in 1981. It’s politicised lyrics are offset by some surprisingly emotive songwriting and deft arrangements – this is melodic post-punk at its finest. The iconic cover art – which depicts what at first appears to be three firemen using a hose to try to extinguish a fire in the Houses of Parliament, until you see the back of the record and realise they’re actually spraying the flames with petrol – is by renowned anarchist artist Clifford Harper.

After releasing a couple of subsequent singles and EPs, Zounds split up in 1983. They re-formed in 2007, and since 2010 have become a regular touring and recording entity again.

The new vinyl edition of The Curse of Zounds is out August 22.