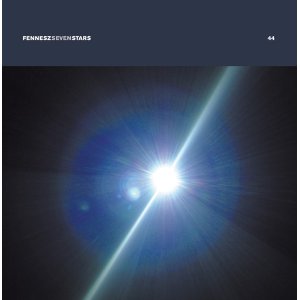 It’s difficult not to read any ambient work as a potential score of something, as its narratives are usually not worn on its sleeve and leaves room to underscore other narratives. Christian Fennesz has of course scored and licensed songs for films in the past, but, regardless, Seven Stars, his new solo EP on Touch, is another addition to his imaginary filmography of abstractions.

Fennesz’s work has always appeared an extension of his persona, a serious Austrian with a madman’s quest for unique, original sound elements, all the while practiced with restraint and patience. There’s a mixed love to his work, of both serious noise/ambient/”challenging” musicians and also pop icons like The Beatles and Brian Wilson; however, the gravitas usually outshines the playfulness. The producer has mentioned that he often does not listen to other people’s music at the end of a day working on his own material. I imagine him in a Modernist apartment, alone and silent, stoically pondering and trying to un-hear the day’s work.

Seven Stars is both grandiose and understated: abstract string, guitar, and synth emotions on a mostly beatless canvas. The Hand of God comes in and out of focus on tracks like ‘Reshift’, while whatever the opposite of God is opens the album in ‘July’, Fennesz meandering around a rusty toolshed, rustling up ghosts of the Industrial Revolution from his sound bank before an ambling, melancholy string line emerges. ‘Liminal’ introduces chord progressions through various guitars and plays like something Tortoise might have cooked up, but with more distortion or a more minimal version of Mark MacGuire’s guitars.

‘Shift’ and (presumably his version of a remix) ‘Reshift’ are string-led overtures to a cosmic opera, without ever delivering the opera. It’s just implied. As with past albums Endless Summer and Black Sea, Fennesz oscillates between the brevity of his pop influences and more sprawling, less linear compositions. The most exciting track is ‘Seven Stars,’ where Steven Hess’s andante downtempo drumming rises out of the otherwise beatless ether to accompany Fennesz’s guitar on a gravity-less saunter, past celestial wooshes and space scribbles.

Like most of Fennesz’s work, Seven Stars would be some romantic shit to die to, equal parts bombast and benevolence. He’s cementing himself as likely frontrunner to score the reboot of 2001: A Space Odyssey, when someone in our lifetime will invariably, criminally try to reanimate another classic. Were he to be involved, I don’t think anyone could resent the idea.