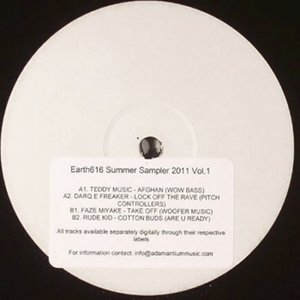 Grime might be experiencing a bit of a resurgence lately, but look beyond your crossover outposts – Hyperdub, Butterz, Oil Gang – and the field is still as messy and strewn with debris as ever. A lack of proper physical releases, delays, conflicts and other issues often keep the genre, especially its instrumental component, from ever reaching beyond its core of diehards. Logan Sama, integral Kiss FM jock and one of grime’s most prominent DJs, has been working to change that with his Earth616 imprint, a vinyl-only label that has thus far managed to bring a more “traditional” grime sound to those coveted slabs of wax. The label’s latest project of “Summer Samplers” is a revival of Sama’s older tradition of “Winter Samplers” wherein the hottest dubs and instrumentals of the time would be spread across one 12″.

The first Summer Sampler lives up to its billing: pure white hot adrenaline, featuring two names that already should be familiar to readers in Darq E Freaker and Rude Kid, and two who might not, Faze Miyake and Teddy Music. Let’s start with the first two: Darq E Freaker’s collaboration with Rival, ‘Lock Off The Rave’ has been a staple of grime sets for the past few months, and for good reason: it’s sheer distilled aggression, taking the gritty literalism of ancient tunes like ‘Cock Back’ and wrapping them in layers of synthesized destruction and technological fetish. It’s the sound of imaginary guns letting out bursts of pure and tangible energy, and in the track’s most frenetic sections the burned-out snares feel like glowing fissures forcibly cracking open the earth. Rude Kid’s contribution is a little more down-to-earth, ‘Cotton Buds’ taking the spindly, sometimes fatally minimal grime of his patchy debut album Are You Ready and crucially padding it with several extra layers of harsh fuzz, so his bendy and bucking synth lines slice rather than merely undulate.

It’s the two other producers that really elevate the EP from “solid” to event status. Faze Miyake’s ‘Take Off’ expertly conflates OG grime with American hip-hop touchstones and signatures. Throwing a swung and bottom-heavy percussive pattern on a nasty, repetitive descending synth melody, it has all the portentous dread of early Dizzee but slowed down to a laborious hip-hop pace that makes it all the more menacing. Teddy Music’s ‘Afghan’, however, is arguably the star of the EP, snares rolled up into powerful salvos that tick and rattle like machine guns, grindcore style, as the beefy riff digs deep into the low-end while gorgeous, hi-definition synth melodies twirl and dance above the terrestrial warfare.

The tracks on Summer Sampler are perhaps “simpler” than you might be used to if you’re an acolyte of those labels I mentioned above, but that’s because for the most part the kind of grime that Logan Sama champions is the real no-holds-barred stuff: no bullshit, no pretense, no wankery. That’s not to say that it’s any less experimental or daring: the pure ferocity of the sound design on tracks like ‘Afghan’ or ‘Lock Off The Rave’ is something truly uncommon. If you want to hear the beating heart of grime at its most vital, its most unimpeachable, and its obnoxiously loudest, you’ve come to the right place. It’s a triumph for a struggling label that finally seems to be getting back on its feet, and hopefully it can help the entire genre along in that same journey.