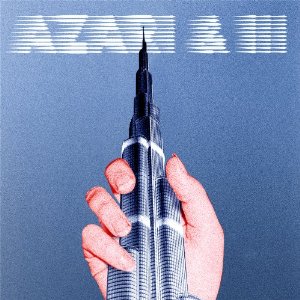 There are two basic ways to judge Azari & III’s debut album, and they roughly boil down to your familiarity with the group.

Whatever number classic house renaissance we’re in, it sounds fresh to you, and, over the last few years, the group have emerged as an aggressive collective delivering a lot, even if you didn’t realize it. It’s house revivalism mixed with varying degrees of revisionism. It’s self-aware and sincere. It’s debauched and debonair. It’s fresh and classic. The vocals are silky and menacing.

‘Hungry for the Power’ and ‘Reckless with Your Love’ are huge. You have to elbow people out of the way to play this for everyone in your turntable.fm room. It’s crossover but still has teeth. This is one of your favorite albums of the year.

You rinsed out ‘Reckless with Your Love’ and ‘Hungry for the Power’ in ’09, and ‘Indigo’ and ‘Into the Night’ in ’10 (even though the ’09 output is still their strongest), so while everything on here seems pretty good to good, the timing of this release strikes you as odd.

You are somewhat disappointed, because, although there is new material here, it’s outshone by the familiar monsters that you already know. At its worst, you suspect the album is more of a credibility grab and audience widener, cementing a reputation as an act with a larger body of work that can play “live” and deliver more than a couple 12″s. The result is a collection of a few really big singles (which are mostly overfamiliarized to you at this point) and decent tracks that could be fodder for great remixes… but without those great remixes. Overall, it seems overcooked and under-edited, though even the familiar ones can still work a room.

Then you, inevitably, start to think that maybe a mixed version of the album would be more satisfying. Every track has to build elements, hit a groove, belt the hooks, breakdown, climax, and outro, which can get tiring. It’s a tough listen, mostly because hitting one specific area and not straying too much throughout its hour duration (no matter which genre or style you’re dealing with) can become hard work.

Then again, you remember that this is entirely an album of club cuts, tracks whose frequencies need not only to be felt on a large system but, also, require a group to enjoy and perhaps shouldn’t be deconstructed like other genre albums. There are no ballads or much variation on tempo and intensity because it’s serving the dancefloor specifically, and you remind yourself of this. Even though this reads more like a résumé than a proper album, you still think Azari & III are quite talented and seem to have a lot left to offer. You await what comes next.

The truth, as ever, is somewhere in the middle.