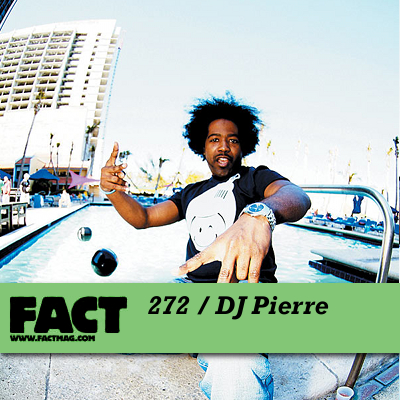 Pierre’s importance to modern dance music can’t be overstated. A founding member of Chicago group Phuture with Spanky and Herb J, the trio’s 1986 single ‘Acid Trax’ didn’t mark the first use of the Roland TB-303’s bass sound in dance music, but it did mark its most significant, setting a template for Acid House that Pierre and Phuture would develop on tracks like ‘Dream Girl’ and ‘Your Only Friend’.

This week, Numbers have reissued one of Pierre’s all-time overlooked classics, the storming ‘Mystery Girl’ (recorded as Pierre’s Pfantasy Club, with a young Felix the Housecat on keys), while Phuture’s ‘Acid Trax’ has also been recently excavated, with remixes by Green Velvet and more. To mark these events, we persuaded Pierre to dig through his crates and draw for more of his classics. We don’t have a full tracklist, but those that know will recognize plenty of the material on show here.