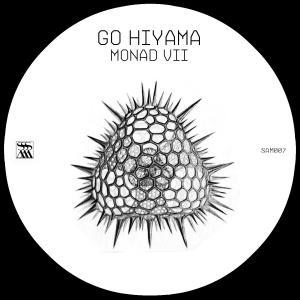 There’s an element of “always the bridesmaid, never the bride” with Go Hiyama. He’s been releasing records since 2002, over a huge array of labels from Perc Trax to Oscar Mulero’s Warm Up, but never seems to have caught the eye of the press or publci in a way that some of contemporaries have. That’s possibly due to his sound – a dark, experimental take on techno, which rather than playing on abstraction of atmosphere and tone in the way that artists like Shifted have done so well, instead uses rhythmic variations that have just as much in common with Autechre as they do Surgeon. Surgeon is a good touch-point, in fact – Hiyama has featured in a good few of his mixes, and shares an interest in moving things away from a dominant kick and embracing sounds that are as inspired by breakbeat and garage as they are Detroit.

This EP on the increasingly important Stroboscopic Artefacts is unlikely to cause him to suddenly break out, as it covers ground in the same rough area he’s been located at in the past; but that’s a shame, as this is extremely confident music which, to coin a cliche, works as well in headphones as it does on a peak-time dancefloor. The middle two tracks on the EP carry the most weight; ‘Kakeru’ (Multiplication) uses a shuddering, clipped kick against precision electronics that move like an assembly line around the centre, static and subdued roaring compressed down in the background, whilst ‘Waru’ (Division) hits hard with an off-kilter loop counterpointing phased, distorted synths, never settling down into a steady groove and instead restlessly rattling onwards, underpinned by a metronomic click.

Closer ‘Hiku’ (Subtraction) is the most abstract of all, offering a half-speed rattle, like dub with its loose-limbed liquidity stripped away to leave only the reversed cavernous decay trails; with reversed melody and flanging echo-chamber effects, it bears as much in common with Scorn or Kevin Martin’s Ice project than anything else. Overall, it’s an assured and extremely accomplished close to an EP that would benefit being heard outwith the usual audience for this sort of cerebral techno.