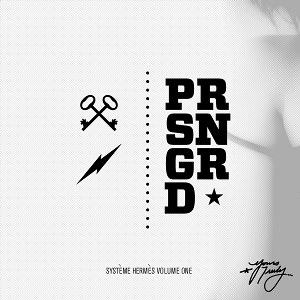 There’s a lot happening on Canada’s West Coast right now in terms of dance music – notably in the dual hubs of Vancouver and Victoria – but you probably wouldn’t know about any of it unless you lived in or at least visited one of those cities. The wealth of talent is only growing, but it seems like the oppressive height of the Rocky Mountains to the East is managing to keep even word of mouth at bay, as the artists with the most devoted Vancouver followings rarely manage to make a splash outside of British Columbia.

Montreal/Vancouver’s Robert Squire, known currently as Prison Garde and formerly as Sixtoo and part of Megasoid, is one of the city’s most imaginative and prolific producers, and certainly one of its most memorable DJs, whether he’s throwing down an unpredictable live set of his own carefully-engineered productions or navigating an elaborate thicket of hip-hop, bass music, house, and techno. Part of emerging hip-hop supergroup Nouveau Palais with Lunice and Ango, Squire has just released the de facto debut Prison Garde album in the form of a free download as Systeme Hermes Vol. 1.

What makes Prison Garde so special? At a time when the idea of blending genres is basically obligatory, Squire’s music obliterates categorization, an endlessly refined and purified form of dancefloor essentialism. His sound isn’t exactly minimal or reductionist, but it is subtler than a lot of his contemporaries, and the fact that he also doubles as a gear nerd means his tracks are built with an impressive disposal of meaty-sounding synths. Rather than overload his tracks with colourful melodies or 808 cascades, Squire recognizes the impact of simplicity, nicking an aesthetic from early-’00s hip-hop and painting it with the brush of bass music circa late-2000s – think a lighthearted Boddika. On Systeme Hermes, every elastic, playful snare hit is devastating, every little glimpse of colour or brushstroke of melody blinding. True to this freeform style, Systeme Hermes ranges in the BPMs from 74 to 150, with most of his tracks hovering around the house-friendly tempo of 110.

Squire’s hip-hop tracks very from Salva-style synth funk (‘L’Automne’) to totally unique creations – ‘I Know You’re Mine’, with its drunkenly swaying wooden percussion, Joker-esque fuzz chords and slinky vocal moans, is a definite highlight, exhibiting Squire’s talent to make the most out of familiar elements. Meanwhile, his housier efforts are angular and twitchy, ranging from the boogie-driven ‘Be Loved’ to the stabby, nerve-wracked ‘Tokyo Bullit Train’. He even makes an overture towards deep house with ‘Chicago Transit’, which still gleams and twinkles expensively like the best of his work. Other times he might be sublimating chipmunk vocal moans into staccato chord shimmer on ‘New Love Old Girl’, or letting a sequencer writhe in dripping, squelchy ecstasy on ‘Zero’.

If you didn’t get the picture, Squire is a bit of a restless artist, and his Prison Garde project has given him the chance to indulge his every idea and fancy at will – evidenced by a record with no unifying factor except for its always professional execution and fantastic analogue sound design. Fulfilling the post-millennial DIY quotient for a record released in a hurry for free on the internet, there’s no proper running order on Systeme Hermes, with tracks instead sorted by their BPMs. There’s even an “808 Edit” of the Weeknd’s ‘What You Need’ thrown in for good measure, and before you cringe at the idea of another unofficial bootleg edit of one of 2011’s biggest sources of hipster fodder, Squire’s take on it is yet more proof that he’s not your average beat merchant. Turning such a smoky, soulful ballad into something that can sit alongside tracks like ‘Zero’ or ‘Parking Lot’ is no easy feat, and Squire’s pins-and-needles drums and plunging bassline fit the ubiquitous track surprisingly snugly. That he could do all that with just an 808 and a bassline is yet further testament to how much Squire can make out of so little, and that’s why he’s more than just another synth fetishist or ADD-addled hip-hop dilettante.

It needs to be recognized that London and L.A. aren’t the only hotbeds for musical creativity in this particular realm of experimental dance music; regional variants aren’t just knock-offs, there’s genuine innovation going on everywhere you can look, and Vancouver is practically bursting at the seams. Prison Garde makes for an ideal ambassador for the new wave of Canadian West Coast talent, and a fine foil for his East Coast counterpart Jacques Greene. His music shares ideas with his UK and US contemporaries, and speaks in that same dialogue, but brings it to idiosyncratic new frontiers with nary a misstep or stumble – an outlook that’s adventurous even in a scene that makes adventure its primary form of forward momentum. He might not be a newcomer, but that hardly matters, because he deserves all the “breakthrough” plaudits he can get, and hopefully with the release of such a stunning collection of tunes for totally free access, he’ll start getting what he deserves.