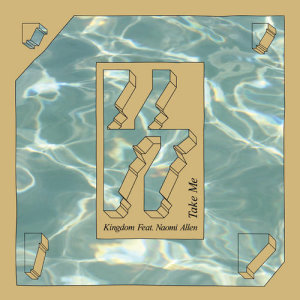 Even if you didn’t know Kingdom was an r’n’b obsessive, you could probably guess it from his productions: even at their most underground and shamanic, there’s always that gloss to them – even when he uses what sounds like industrial samples for percussion, he treats those clanging girders in such a way that they sound coated in gold paint rather than rust. That’s before getting into the fact that his DJ sets frequently feature his bootlegs of Usher, Ciara and more.

Given all this, producing a track for Naomi Allen of eternally underrated girl group Electrik Red must be a bit of a dream for Kingdom – so credit to him for not compromising once on ‘Take Me’. More than anything, it sounds like he’s having a ton of fun: at the track’s base is a tight drum machine loop, but it’s constantly having clusters of metal dropped on top of it and aquatic synths sounds splashed over it. In the track’s second half, he introduces some slight eski bass sounds and Allen drops her tone accordingly to a whisper. Tight as you like, and hopefully the start of more collaborations of this kind.