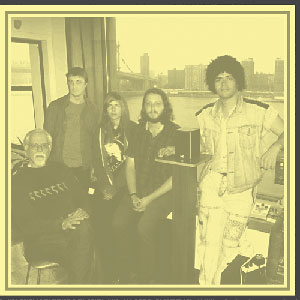 There are several exceptional things about the most recent release in RVNG’s FRKWYS series. Firstly, it feels like the product of a singular vision, when it could have easily gone the muddled supergroup route. So far, the series has paired two artists of different generations together for a one-off release, often done only a few dense, improvised sittings. Here, 70-something year old David Borden, Moog contemporary and literal innovator squares off with Daniel Lopatin of Oneohtrix Point Never fame, and they decided to enlist other younger synth master producers, James Ferraro, Laurel Halo, and Samuel Godin as well. They have formed some sort of synth supergroup, even if they won’t be coming to an arena near you and even though that term is typically a death sentence.

Acts have typically preferred the term side project or one off to the cocksure mantle of supergroup. History has proven that more often than not, supergroups/side projects with really high pedigree often amount to something that is probably more interesting for the musicians than the audience or a product that is less the sum of its parts. In a lot of ways, the last decade feels like a golden era in collaboration, echoing the more memorable supergroups of the late ’60s/early ’70s. While a sizable amount of trivial collaborations have surfaced, the FRKWYS series in particular has championed understated power couples.

Recorded in two days almost a year ago, RVNG only recently released the music, letting the producers edit over the course of months and allowing the material marinate. When the standard in music now seems to be instant publishing, slow-cooking tempos like this are refreshing and mirror the pace of the album.

The result is in many categories the actual antithesis of The Throne, that other notable supergroup to emerge in the last few months. Genre and intentions aside, Jay-Z and Kanye have enlisted countless producers to noodle and beat program over their outdated (and poorly timed) boasts of white western wealth. The Throne is the prototypical example of a train-wreck fusion of two hyperbolic egos (see also: LeBron and Dwayne Wade) with undoubtedly little self-criticism or criticality in general, just the sound of rich people swimming in money or successful people basking in success, during a time when the artist class is dissolving. I don’t know anything about Lopatin and Borden’s financials, because I’m not interested. Instead, their hypnotic swells and soundscapes push out mundane secular thoughts like bank accounts and The Internet, resulting in a cohesive, gratifying and most of all, welcome respite from the immediacy of most contemporary releases.